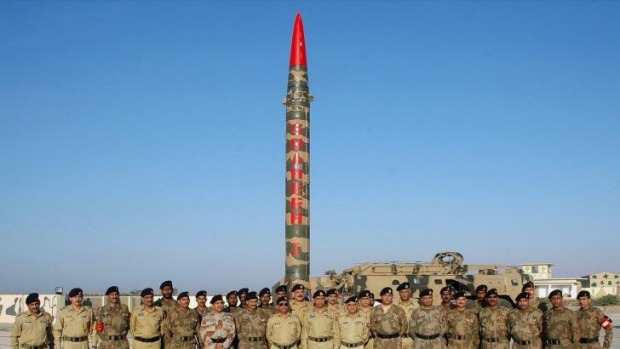 Written by Syed Ali Zia Jaffery
The spread of nuclear weapons: more may be better.Kenneth Waltz

The essence of the Westphalian state system lies in the concept of territorial sovereignty. Inherent in the sanctity of the mainland is the need for national security. This has become an indispensable vital national interest of all states. The colossal damage caused by the atom bomb in Hiroshima and Nagasaki bears testimony to the annihilation capacity of Weapons of Mass Destruction (WMDs). However, there is a lot more to the use of the “deadly” nukes.

The veritable value of going nuclear can be gauged in the hostile Indo-Pak theatre. The partition of the Indian Subcontinent saw the emergence of this intense rivalry from the very outset. The reasons are well documented and even a cursory look at them would enable students and observers to decipher the anatomy of adversarial ties. Both states grappled with their perceived and actual fears, and to withstand threats to their interests embroiled in armament, both conventional and nuclear. The need for treading on the nuclear path was different for both countries.

It is imperative to briefly differentiate between the reasons for both South Asian titans going nuclear. India’s gargantuan foreign policy goals and security thinking shaped by long-held misgivings shaped her nuclear ambitions. Pakistan, on the other hand, faced with a quantitatively superior eastern neighbor, which was instrumental in its dismemberment, had to look for “internal balancing”. Indeed, the growing conventional asymmetry necessitated Islamabad to bear its own teeth.

Pakistan was left with no choice but to induct a force equalizer to deter India from any military misadventure. Hence, Pakistan’s nuclear doctrine and the development of a cohesive nuclear force are intended to ward-off threats emanating from India. In all earnestness, Pakistan’s nuclear incursions are solely India centric.

This assertion can be corroborated by the fact that Pakistan maintains the doctrine of Credible Minimum Deterrence (CMD). The idea behind CMD is that an enemy larger in size can be dissuaded with small but a credible nuclear force. The doctrine is well-suited to Pakistan’s evident limitations.

Pakistan’s persistence with CMD has been effective in averting wars and also the “nuclear bogey” among other factors, ensured that low-intensity conflicts did not escalate into a full scale war. The Kargil conflagration is perhaps a classic case of how the knowledge of the “nuclear possession” kept the conflict limited to a series of tactical skirmishes.

Pessimists opine that deterrence theory failed when both locked horns over strategically vital peaks. However, it must be stressed that a 1965-like escalation was avoided, with the help of international intervention because both India and Pakistan had a nuclear device in their caches.

Nuclear capabilities do not rule-out the occurrence of low-intensity conflicts, for they bring about a stability-instability paradox, wherein things remain stable at the higher end of the conflict spectrum. One could argue that nuclear weapons provided both states with a cushion to wrest control of Kargil through tactical engagements, but it also acted as an equalizer, which baulked nefarious designs. During the whole episode, the nuclear umbrella gave Pakistan much-needed psychological security as she felt less vulnerable to a 1971-like Indian onslaught. The events of 1971 were monumental in shaping Pakistan’s nuclear campaign.

International pressure prevailed on two other occasions. The first was in wake of Operation Parakram, when after the parliament attacks, India amassed its forces on the International Border. War mongering did not result in any physical engagement after the Mumbai attacks in 2008.

The success of “Nuclear Pakistan” in preventing a full-scale war can be evidenced from the fact that the incendiary forces which caused previous wars and battles still persist. To-date there are opportunities akin to those present in 1971 for India to capitalize upon. Moreover, if accusations are to be believed there exists a pre-1965 war situation. Indeed, the possession of an assured nuclear capability has changed the type of threat emanating from the eastern flank. The ongoing non-kinetic war must and cannot be labeled as a failure of deterrence theory, for Pakistan’s nuclear posture is intended to make the pursuance of a military option untenable for India to use against Pakistan.

Pakistan officially maintains that it does not aim to attain nuclear parity with India and will continue with the Minimum Credible Deterrence. Minimum is not a number but refers to the acquisition of no more nuclear weapons than necessary to deter the adversary from launching a nuclear attack. Thus the word “minimum” is relative at best and hence Pakistan has to monitor and evaluate the developments across the border. The question that one needs to answer is whether Pakistan’s increasing stockpile is a rational policy? Is there a need to bolster means of second-strike and inducting long-range ballistic missiles in the scheme of things?

First, the development of a second-strike capability is central to deterrence. India, with a well developed second/counter strike capability and a greater geographical depth had the propensity to withstand a surprise or a pre-emptive strike from Pakistan. However, Pakistan bereft of the very advantages would not have been able to thwart a retaliation. Thus, the addition of an assured second-strike capability is imperative to make deterrence credible. Second, the need for modernizing delivery systems is all the more important because deterrence hooks upon the ability to make the enemy aware of the ability and the willingness to use the device if and when the need arises.

Eyebrows have been raised regarding two aspects of Pakistan’s nuclear program. One is the growth in the number of warheads whilst the other is concerned with the design of Tactical Nuclear Weapons.

As aforementioned, deterrence is more effective when a country has adequate second-strike prowess .The number game hence becomes all the more important especially given the threats posed to CMD by India’s ever increasing economic and technological muscle. Second-strike elicits its strength of the “residual” capacity hence Pakistan can feel relatively safer by the mere accumulation of warheads before making them more credible. The quantum has gained currency especially after India’s deployment of the Ballistic Missile Defense System. Albeit in a rudimentary stage, the likelihood of intercepting Pakistan’s main delivery vehicles can greatly undermine the efficacy of Credible Minimum Deterrence. India’s BMD is likely to undermine Pakistan’s retaliatory capacity but a greater amount of warheads can reduce the precision of India’s Ballistic Missile Defense.

There are concerns over Pakistan’s possession of Short Range Nasr missile which has the ability to bring Tactical Nuclear Weapons (TNWs) on the battlefield. Pakistan maintains that TNWs are meant to counter India’s Cold Start Doctrine (CSD). Although, the possibility of CSD leading to a nuclear escalation is less but Pakistan feels that the deployment of TNWs on the borders will make India vigilant, invoking this dangerous limited war doctrine. Indeed, deploying nuclear weapons at the tactical level will be a signal for marching forces not to escalate beyond the set threshold. However, it must be stressed that Integrated Battle Groups (IBGs) which happen to be the mainstay of Cold Start, can be effectively dealt with by conventional forces; bringing nuclear weapons in a theatre may put Pakistan in danger of a surprise strategic nuclear attack. However, TNWs will give Pakistan the much-needed assurance and confidence in facing a limited Indian onslaught as enshrined in the Cold Start Doctrine.

In sum, India’s grandiose aspirations and the initiatives taken to augment her military muscle, coupled with Pakistan’s limitations necessitate the latter to add to its deterrence value. This is being rightly done by not only focusing on credibility and survivability, but also on the quantum of warheads. This is in-line with Pakistan’s quest to provide for her own security in an environment dictated by anarchy and self-help. Perhaps, it is pertinent to quote Waltz once more amidst doubts about the perils of a “Nuclear Pakistan”.

“If a country has nuclear weapons, it will not be attacked militarily in ways that threaten its manifestly vital interests. That is 100 percent true, without exception, over a period of more than fifty years.”