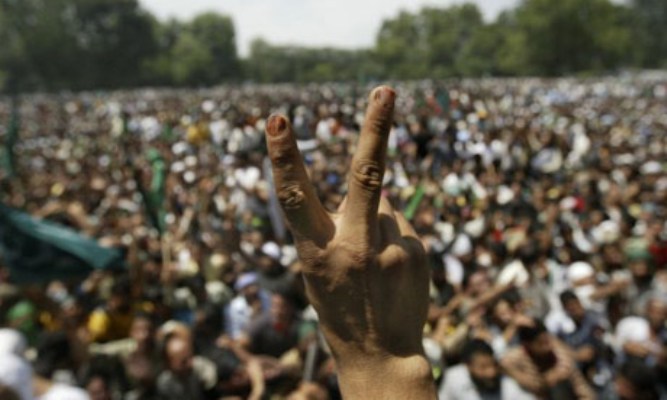 ‘But Sahib, we are Kashmiris, see. We are not Indians.’ These are the opening lines of the chapter on Kashmir quoted by historian John Keay in his book Midnight Descendants; referring to the answer he received from Ghulam Mohamed, a houseboat owner, in the summer of 1967 when asked by the author as to why he had been refusing to take bookings from Indian tourists. Keay, then a young correspondent, wrote ‘Kashmir seemed trapped in a time warp’; much like nowadays as people aware of this long standing conflict, describe it. He explained that the boatman’s answer reflected the sentiments of 1947 though Kashmir had been under New Delhi ‘for nineteen summers’. He did not believe much had changed here and wrote that, ‘two decades of what Ghulam Mohamed called Indian occupation had changed very little.’ He further tried to emphasize this point and by giving us a glimpse of the mood in the street by writing verbatim how Ghulam Mohamed dissected the geographical contours of this formerly princely state that according to him is ‘South Asia’s bloodiest bone of contention’. ‘See, Kashmir. Kashmir is not India. India begins at Jammu over there, across the Banihal Pass. Here, this is not India.’ These few words of Ghulam Mohamed that even after four decades Keay remembers, and has written in his recent book that describes the turbulent course of history of the subcontinent, were echoed once again by Kashmiris recently in the last year’s summer when New Delhi used muscle power to tackle the dissent, killing and blinding a record number of young Kashmiris in the process.

According to the author, the year 1967 is important as everything apparently seemed to be settling down and it was business as usual in Kashmir and merry days for India, for ‘Pakistani attempt to wrest it from India had just failed, and the Banihal Pass beneath whose summit the only access road now burrowed through a dripping tunnel had been reopened’. The tourists were returning, a new engineering college was being constructed, new emporia opened while the powder blue berets of UNMOGIP were the only reminder that Kashmir issue was not forgotten by the world at large. As the lull set in, this was also the time when Kashmir became the dream destination of the Indian film Industry; for the colour replaced the black and white of Indian cinema and the love affair of Kashmir and Bollywood started, which continued till late eighties of the last century when the armed struggle started by Kashmiris, in an attempt to untangle the Kashmir knot shook the region, bringing at times the two rival countries born out of partition, India-Pakistan head on with each other.

But even then the author writes, ‘yet the place remained palpably un-Indian. Uniquely, here English and Urdu were the official languages, with Hindi not much heard or written. Islam was the prevailing faith, tweed the preferred textile, and shawls and carpets the main trade. Instead of the shady banyan and mango of the plains, sprightly willow and poplar lined the roadside. The year had recognizable seasons; they came in the right order; and judging by the umbrellas and the galvanized roofing, rain could be expected in all of them. The tea was sometimes pink; the meat was cooked in milk. Kingfishers piped among the sedge, dahlia and marigolds bedecked the gardens and the timbered bridges cantilevered crazily over the waterways. In Srinagar, the capital, the puddled alleyways and higgledy houses with their lattice shutters reminded V. S Naipaul, then writing his An Area of Darkness, of a dank medieval Europe.

Instead of India’s heat and dust, here there was water everywhere, snow on the peaks and scarcely a sari to be seen. Of all the erstwhile princely states, Kashmir alone neither fitted the image of India nor felt like India. If the calm of sixties that blossomed into the love of Kashmir and Bollywood, if not Indians, with no expressive demonstration of simmering discord was still un-Indian. I doubt my naivety if I believe everything has changed and the two have become compatible during the last few decades.  For now, the sentiment having survived and continued in the frozen period or the lull period, only to surface first as a violent struggle, then largely as nonviolent with strong expressions on the streets, repeating more than thrice in a decade with noted writer Tariq Ali in 2010 summing up expressively as ‘Not crushed merely ignored’ about the worlds indifference towards Kashmir crisis, it makes me wonder if someone asks to look for ‘exit with dignity’ and to anchor the boat to something that is fundamentally ‘unlike’ us.

Apart from historical background the Kashmir issue is also about the collective loss of faith in politics and the memories of iron fist approach adopted by India to quell and tame. Did anything change over these years? Yes Kashmiris found and may continue to find themselves orphans to influence the world opinion in their favor and post 9/11 ‘the ugly anti Muslim chauvinism that accompanies India’s violence’ named conveniently ‘war on terror’ may not give the world those transient twinges of conscience that it did in the past, but it cannot be a reason to abandon the truth and side with falsehood for it is neither a liberal value, nor a leaf from enlightened moderation and is in fact against most religious tenets.

One may raise queries as to why mixed signals have been given by Kashmiris, why in between the cry for Azadi, a Pakistani flag is raised? Is there a search for ideas that have a broad resonance among the Muslim majority populations for a caliphate or secular democracy? But one needs to understand that every individual carries multiple identities from family to ethnicity to religion, these intertwine and play at different levels and when communities are obliged to protect themselves against others, they seek to forge common grounds against the enemy. To rally public support against external intervention they will turn to whichever banner that unites more people most effectively and religion being powerful will be invoked wherever it can to galvanize the public opinion. This is not unique to Muslims only, Stalin embraced Orthodox Church as a rallying point when under assault of Third Reich in World War 2, Japanese sought the sacred character of Shinto religion before World War 2 for its expansionist and imperialist policies in Asia, so did the Buddhist Sinhalese in Sri Lanka by employing monks to strengthen Sinhalese support for the civil war, and so did the Hindus in India by using rath yatra in recent past to increase the communal fervor to build Ram Temple in place of Babri Masjid. At a time when the whole Muslim world is felt to be under siege most other identities are bound to lose importance and symbols that define unity, resistance and strength will be seen flying in the hands of those who organize to defend it from aggression. Till this persecution directed against Muslims wherever fighting for their rights continues it will inflate the role of these symbols and push the resolve of those holding them to abnormal levels.

is from Srinagar. He is a medical doctor by profession who often writes columns for local newspapers. Dr. Javed also take deep interest in the political history of Kashmir, India, and Pakistan.