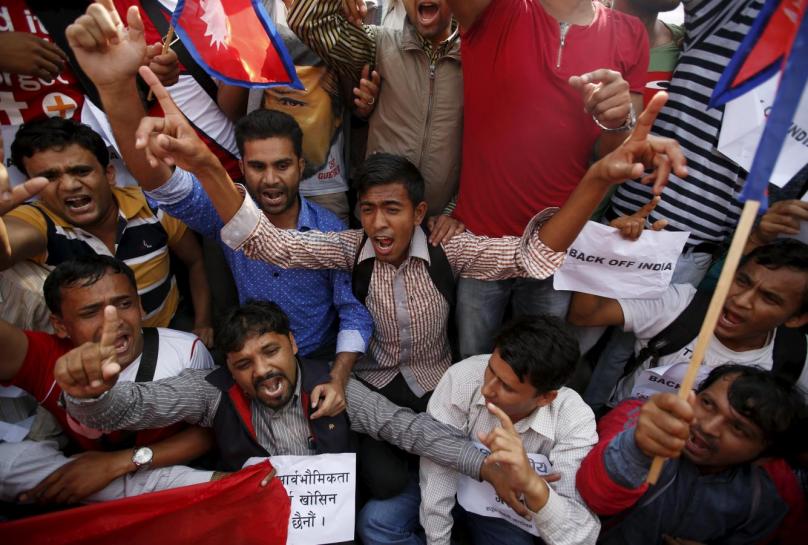 The geopolitics of the subcontinent is best defined by the intense enmity between the two major states of India and Pakistan. Both nations have gone to war at least three times and have fought many a skirmish against each other on their border. Even in non-military domains such as economy and politics both nations are seen going head to head, especially after both countries went nuclear.

Recently, tensions have been rising anew between the two nations. The recent uprising in Indian Occupied Kashmir has led to a bout of renewed hostility between the two South Asian neighbours. Peace talks between India and Pakistan are “dead in the water” so to speak; the prospects for peace sparked by the bonhomie between Nawaz Sharif and Narendra Damodardas Modi have drowned in the tumult of state terrorism in Indian Occupied Kashmir (IOK), guerilla attacks on military installations, widespread bigotry and ongoing hostilities between the militaries of both sides. Blaming Pakistan for a deadly guerrilla attack on its army base in Uri situated in IOK, New Delhi claimed to have conducted a Surgical Strike along the LOC while facing concentrated jingoism within its internal environment which has been egged on by an extremely militaristic media.

In India particularly, nearly everything sour between the two nations is portrayed as Pakistan’s fault. A storm of hate and jingoism has been unleashed in India with undesirables in the eye of it. Newspapers in Kashmir have been banned, Indians asking for proof of the Surgical Strikes claimed by New Delhi are declared anti-national, and the Indian government is being paraded as part of the Hindu pantheon. However, Indian peaceniks and Pakistanis (mainly actors) working in the Indian industry are facing the full wrath.

Pakistani artists working in India have been threatened with violence by Hindutva groups like the  Maharashtra Navirnman Sena. Indian film icons Salman Khan and Om Puri have reportedly been labelled traitors for arguing to keep art and culture separate from politics. Meanwhile, on the other side of the border, the Pakistani motion picture association and PEMRA (Pakistan Electronic Media Regulatory Authority) have threatened to stop screening Indian films and to ban Indian artists from appearing in Pakistani films and TV commercials in response to the outrage in India.

Many present their own opinions on both sides as to where this animosity springs from. The phrases “interest of the power elites”, “terrorism”, “military rule”, “rogue state”, “militant proxies” and even the ideological term “millennia old war between Islam and Hinduism” are thrown in the mix to justify the enmity between the two states.  While some of these factors do promote conflict among the two states,  the reality is far more sobering and relates to the way international relations have been treated since the treaty of Westphalia.

The rather tragic truth is that the modern day Indo-Pak subcontinent is the anarchic battleground of states that make up the theoretical world of Realism. India is the most powerful country of the subcontinent but does not have the capability to do away with the obstacle that is Pakistan. It may be maintained that India is using its role as the major power of South Asia to become a regional hegemon. This pursuit of hegemony causes conflict between India and Pakistan.

It can be asserted that a state will be granted the status of a hegemon when it is the single great power in its region. When a region contains more than one great power, there cannot be a hegemon. A state with the capacity to dictate a specific region is a potential hegemon. Nonetheless, as John Mearsheimer notes, hegemony is rare because ‘the costs of expansion usually outrun the benefits before domination is achieved’.

Regional hegemony which is the dominance of a region by a single local power has been elaborated upon extensively in John Mearsheimer’s book, The Tragedy of Great Power Politics. In his theory of Offensive Realism, he highlights three major factors that drive a nation to pursue hegemony: the anarchy prevalent in the international political system, a state’s inbuilt yearning for survival, and the doubt in ascertaining the intentions of other states. Mearsheimer surmises that many powers perceive dominating their region as a more realistic goal as compared to global hegemony.

Countries that surround India, such as Pakistan, Sri Lanka, Bangladesh, Nepal, Bhutan, and Burma are nowhere at par with India with regard to size and population. India dominates the whole area geographically. She is the only country that shares a border or a coast line with all other six states while none of them have common borders with each other. As the famed subcontinental scholar Chanakya has said, “In trans-border relations, there are no permanent friends or permanent enemies or even permanent borders. There are only permanent interests and everything should be done to secure these interests.” It has only helped India use its geographic advantage to build up its power. India’s geographical bounty makes it a necessary component of survival of South Asia’s landlocked states like Nepal and Bhutan. Similarly the origins of the water systems of Pakistan and Bangladesh also pass through Indian territory making them too dependent on it.

Nepal is particularly vulnerable to India due to its landlocked nature. Nepal’s geographical vulnerabilities have often impelled it to enter into treaties with New Delhi. Yet Nepal has not refrained from acquiring alternatives for reaching the sea. It has tried to establish ties with other powers specifically China in order to dilute its dependence on India. India has rewarded such efforts by Nepal with economic measures such as the economic blockade of 1989 and the more recent 2015-16 blockade.

Bangladesh is a nation that is highly dependent on India. In fact, it may be asserted that India was the single greatest factor in the creation of Bangladesh through its arming, training and instigating of the Mukti Bahini. However, soon after its secession, Bangladesh tried to formulate an independent foreign policy. In response, India formed the Shanti Bahini to wage a guerilla war in the Chittagong Hill tract region against Dhaka like the Mukti Bahini before them.

Sri Lanka, another major South Asian country has also had a tumultuous relationship with India. The Island nation is a stone’s throw from Southern India and hosts a substantial Tamil population which also holds in a dominant position in India’s Tamil Nadu. Sri Lanka has followed a foreign policy largely free of Indian influence; it has cooperated with different foreign powers such as the US and Israel.

Sri Lanka’s closeness to Islamabad was one major irritant to New Delhi, an instance being the provision of refueling facilities to the Pakistani military during the 1971 war. India under Indira Gandhi tried to enact the Mukti Bahini success in Sri Lanka by arming local Tamil separatists; the results were different armed Tamil outfits who in the end culminated into the organization known as the Tamil Tigers. Due to this, Sri Lanka was forced to enter into the Indo-Sri Lanka Accord of 1987 causing an Indian Peace-Keeping-Force (IPKF) to be stationed in Sri Lanka. However, the landing of an Indian military force had an opposite reaction on Sri Lankan society. Anti-India sentiment rose both in the majority Sinhalese and ethnic Tamils which caused the Tamil Tigers to turn against their makers. Indian atrocities on ethnic Tamils such as the 1989 Valvettiturai massacre and the Jaffna hospital massacre also contributed to this. In 1989, the Indian government was forced to recall the IPKF but still India meddled in the Sri Lankan campaign against the Tamil Tigers.

National security adviser M K Narayanan once even went public with the palpable unease in the Indian defence establishment over the matter by stating that Sri Lanka should not seek weapons from China or Pakistan since India as the “big power in the region” would fulfil its needs. The remarks expectedly created a furore in Sri Lanka, especially since Narayanan added that India would not provide weapons with offensive capabilities to the island nation due to political sensitivities in Tamil Nadu. More recently, India used diplomatic pressure to deter Sri Lanka from buying Pakistani JF17 planes.

Indian hegemony also invades into the South Asian identity. The geographical entity called South Asia is celebrated in conferences and art exhibitions, and in the SAARC (the South Asian Association for Regional Cooperation) organisation. This helps India in promoting an Indian Hindu or Hindu Indian culture as the sole representative of the vast cultural melting pot of the subcontinent.

Pakistan to this day remains the most constant hindrance to total Indian hegemony in the Subcontinent. That is why most of India’s attention is diverted towards Pakistan and it is now expending its energies in containing and subjugating Pakistan. This in turn has caused Pakistan to follow a path of Realism in safeguarding its existence.

The Indian claims over Kashmir signify that the territorial sovereignty as well as ideological sanctity of the Pakistani state is at stake. Pakistan does not view India as a threat over only its perceptions of Indian intentions but Indian acts as well. New Delhi has stormed and annexed foreign territory such as Junagarh, Hyderabad and Goa (alongside Kashmir) in the name of police action, it has utilized terrorist proxies in the form of Baloch Ethnonational militants and the MQM. The much touted SAARC summit boycott is a recent sample of India’s venting of rage against members; New Delhi has forced postponements of SAARC Summits on four occasions: 1991 (6th Summit in Colombo) 1999 (11th Summit in Kathmandu), 2013 (12th Summit in Islamabad) and 2005 (13th Summit in Dhaka).

This has caused Islamabad to utilize different strategies to ward off the Indian threat. It has utilized balancing by signing onto different defence pacts such as SEATO and CENTO at the time of the Cold War, but these alliances were ineffective in preventing the territorial disintegration of Pakistan in 1971. Afterwards it pursued a closer relationship with China that has largely paid off by helping to safeguard Pakistan’s existence.

Now it can be asserted that Pakistan still follows a concept of balancing India as opposed to the bandwagoning of the rest of the South Asian states. It follows a concept of area denial thus depriving India of vital land routes to the Middle East and Central Asia as a means to restrict their accumulation of financial wealth hence weakening their military might. The alleged use of non-state actors can be ascertained to be a form of bloodletting in order to stave off New Delhi’s aggression and, it can be said, was a largely successful strategy in the pre 9/11 world.

Now in the Post-9/11 world where there is a remarkable shift in the poles of power as a revisionist bloc in the form of China and Russia is emerging to challenge the West, Islamabad can be seen utilizing the same strategy by opening up to an old foe Russia and further integrating with China via CPEC and SCO in order to balance against an ascendant India which is being used as a pivot by a waning USA.

It may be concluded that the conflict between India and Pakistan, while owing some part to factors such as the Kashmir dispute, is largely due to the anarchic structure of international relations. India being the strongest nation in South Asia is acting as a hegemon which puts it on a path of conflict with Pakistan which is the second strongest country in South Asia; this forces Pakistan to pursue a policy of external balancing in order to stave off New Delhi’s hegemonic actions.