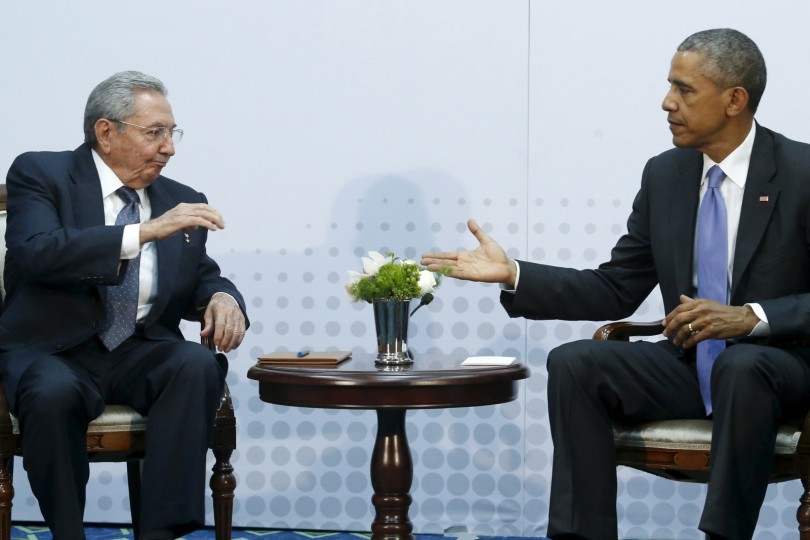 Having strained relations for more than five decades, the Cold war foes have now embarked on a new journey of good relations.

Back in the 1950s, Cuba was a very popular tourist site for Americans. American tourists use to travel to Cuba, just 90 miles of the American coast, for its beautiful beaches and nightlife. At that time, General Batista staged a military coup to assume the power for the second time. The Truman administration quickly recognized the Batista government and provided Cuba help in the form of economic and military aid. Both nations, at that time, enjoyed the all-time good relations.

The Cuban economy was completely dominated by America in those years. During that time the presence of American corporations in Cuba continued to increase.  Meanwhile, corruption was rampant under the Batista government. Moreover, Cuba also became a sanctuary for American criminal figures. But, these issues were often overshadowed by the warm relations between the two neighbors.

Fidel Castro started a guerilla war against the Batista government which resulted in the toppling of the government in 1959 and Castro became the new premier. The Eisenhower administration recognized the new Castro government but relations between the two neighbors deteriorated rapidly. The USA became increasingly concerned about Cuban agrarian reforms and the nationalization of US Citizens-owned industries.

As Cuban government continued to take over the private American-owned businesses, the US imposed trade restrictions on Cuba. The USA stopped buying Cuban sugar and refused to supply oil to its neighbor. Moreover, the USA prohibited all exports to Cuba in October 1960 and diplomatic relations were severed in January 1961. These developments forced Cuba to turn towards the USSR as its new trading partner. The USSR agreed to purchase the Cuban sugar and also became the new source of petroleum for Cuba.

During the next few years, the USA attempted to overthrow the Castro government through a number of ways but remained unsuccessful. Moreover, the American embargo against Cuba was further tightened by adding new restrictions under Kennedy and Reagan administrations.

The collapse of the USSR left Cuba without its major ally. But the American embargo on Cuba was reinforced through numerous acts. The sanctions were also applicable to non-US companies trading with Cuba, which forced the multinational companies to choose the USA over Cuba, because of the former being a large market.

The ease in the embargo first came in January 1999, when Bill Clinton eased travel restrictions in order to increase cultural exchanges between the two neighbors.  In November 2001, USA companies began selling food to Cuba for the first time since the 1959 Cuban revolution. Despite some relaxations in the embargo in those years, travel restrictions were further expanded under Bush administration. The stepping down of Fidel Castro in 2008 did not result in the lifting of the embargo.

However, the relations took a new course of change when Raul Castro became the new Cuban President and Barack Obama was elected as the new American President. The Obama administration, from the start, implemented a less strict policy against Cuba. In March 2009, Obama eased some economic and travel sanctions. Next month, telecommunication-related restrictions were eased which allowed quick and easier access to the Internet for Cuba.

In December 2014, the framework of an agreement to normalize relations and end the embargo was announced by both countries. Both nations pledged to start official negotiations and to reopen their respective embassies.

The restrictions were further relaxed in January 2015, allowing limited import of Cuban cigars and rums, and export of American computer and telecommunication technology. Travel restrictions were also significantly relaxed. The relations between the two neighbors were formally re-established in July 2015 with the opening of their respective embassies.

The Cuban economy has started reaping the benefits of relaxations in restrictions imposed by the USA. The Cuban tourism industry is booming rapidly. 2.2 million people traveled to Cuba during the first half of this year; a 17% increase as compared to last year. Last year, 100,000 USA citizens and 400,000 Cubans living in the USA visited Cuba.

Moreover, the US Treasury Department has announced that there will be no more limits on the amount of money Cuban-Americans can send to their relatives in Cuba. As of 2013, 62% of Cuban households received remittances with a significant portion (an estimated $2 billion annually) coming from family members in the USA.

Despite heading towards normalization in the relations, the main issue between the two neighbors remains the five decades old embargo. The Cuban government estimates that the embargo has amounted to a loss of more than $1.126 trillion. Whereas the USA says that Cuba owes $7 billion to American citizens and companies whose properties were seized after Castro came to power. Although Obama has called for the lifting of the embargo, the US lawmakers, especially Republicans, are in no mood whatsoever to lift the embargo in the near future.