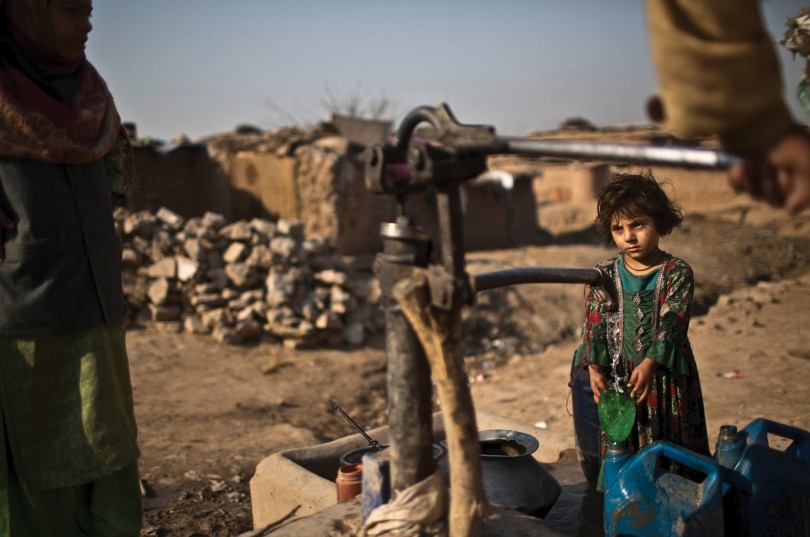 Water – the tri-atomic molecule, not only constitutes the medium of the origin of life but also of its sustenance. Although evidences reveal the presence of water on some extraterrestrial objects as well but by far Earth is the only planet known to possess stable surface reservoirs of liquid water – a prerequisite for life.

71pc of the Earth’s surface is covered by water which appears to be a huge resource but more than 99pc of Earth’s water cannot be directly consumed by humans and other land organisms. Freshwater is only less than three percent of all water, out of which 68pc is locked in the form of glaciers and ice caps, more than 30pc is present in groundwater and only about 0.3pc of all freshwater is found in the form of surface water in rivers, lakes, streams and swamps.

Water is an essential ingredient of an organism’s body and provides the medium for biochemical reactions. However, this alone does not signify the importance of water; we use water for producing and cooking our food, for hygiene, for generating electricity and for running our industries etc.

With ever-increasing human population, industrialization and climate change, water has become not only scarce but is also contaminated often, rendering it unfit for consumption.

Therefore, most of the ancient civilizations were established near stable surface water reservoirs. They were fortunate enough to have found plenty of clean water available. However, with ever-increasing human population, industrialization and climate change, water has become not only scarce but is also contaminated often, rendering it unfit for consumption.

This demands a wise attitude towards the usage of this precious resource. Water management has, therefore, become an integral part of government policies all across the globe. An effective water management strategy comprises of few interrelated and somehow overlapping domains, i.e., water conservation, water pollution control and availability of safe drinking water to citizens.

Talking about the substance that constitutes up to 60pc of our bodies, the point of focus for current discussion is the availability and management of safe drinking water.

There are diverse sources of drinking water supply in Pakistan. A significant portion, around 60pc of drinking water is derived from groundwater aquifers, either directly through boreholes at user’s dwellings, or through large tube wells followed by piped supply to users under the control of some municipality or private housing societies.

Surface waters are another major source of drinking water supplies. Surface water from lakes, rivers or streams is directly utilized predominantly in the upland and inland rural areas as well as supplied through pipelines to urban settlements such as Karachi.

Earth is experiencing a crisis of usable water. The severity of this crisis varies in different parts of the globe depending upon geographical, ecological and/or economic parameters. Pakistan is one of the world’s 36 most water-stressed countries. As per NDWP, 35pc of the Pakistani population lacks access to safe drinking water. Access as defined by NDWP means, “that at least 45 to 120 liter per capita per day of drinking water is available to rural and urban areas, respectively, within the house or at such a distance that the total time required for reaching the water source, collecting water and returning home is not more than 30 minutes”.

There are two major dimensions of the water crisis, water scarcity and water quality:

per NDWP, 35pc of the Pakistani population lacks access to safe drinking water.

In general, the problem of water scarcity stems from population growth, water pollution and climate change, apart from geographical factors in some parts of the world. With an exponential population growth rate, Pakistan is expected to become the sixth most populous country by the year 2050. Accordingly more stress will build-up on water resources leading to further decrease in per capita availability of safe water which already has declined from 5,600 cubic meters in 1947 to 1,017 cubic meters at present.

Secondly, in the changing global climate, Pakistan is experiencing a severe decline in surface water reserves evident in the form of reduced flow in rivers and drying up of several springs and small lakes. Aquifer depletion and resultant lowering of water table is another serious challenge.

The third main factor contributing to water scarcity is water pollution, caused due to the agriculture runoff, industrial effluents and wastewater discharge, further intensifying the issue by rendering many resources unfit for consumption.

Consequently, a huge gap has emerged in the demand and supply of drinking water. Water demand is expected to increase up to 274 MAF (million acre feet) by 2025, and the gap will widen up by ~83 MAF, if there is no increase in the current water supply of 191 MAF. The demand-supply dilemma further exacerbates during summer season when there is a tremendous increase in the demand.

Water demand is expected to increase up to 274 MAF (million acre feet) by 2025, and the gap will widen up by ~83 MAF, if there is no increase in the current water supply of 191 MAF.

Consequences of water scarcity have a direct impact on the quality of life of citizens in the form of increasing anxiety and restlessness, as well as increasing economic burden, due to buying of water from private vendors at expensive rates. Reduction in water supply has given birth to a new system of supplying water via tanker trucks, which has resulted in the creation of water tanker mafias. Taking advantage of the severity of the water crises, the water-tanker mafias sell water at their desired rates. In some places, these mafias are allegedly involved in creating an artificial water shortage, so that people are forced to be dependent on them for their water needs. In Karachi, the largest metropolitan of country, the issue of water scarcity is fueled by a factor of water theft. Many hydrants are operating in the city, some legally, but often illegally. Legal hydrants draw water from Karachi Water Supply Board (KWSB) more than their allocated share, while a mafia of illegal hydrants is also involved in open stealing of KWSB water.

Water quality is the second important factor of major concern in the water crisis. According to an estimate by NDWP, diseases associated with water, sanitation and hygiene cost around 112 billion rupees to Pakistan’s economy each year. Quality of drinking water does not meet the water quality standards in many parts of the world, thus resulting in not just heavy economic losses in various countries, but also becoming a cause of death of several people. Around 250,000 children die every year due to contaminated water alone.

According to an estimate by NDWP, diseases associated with water, sanitation and hygiene cost around 112 billion rupees to Pakistan’s economy each year.

Microbial contamination is responsible for a significant number of water-related mortalities. Fecal coliforms have been detected in drinking water at certain places particularly where there is poor sanitation. Diarrhea is the most common manifestation of microbially contaminated water. It alone accounts for a loss of 55 to 80 billion rupees to Pakistan’s economy per year.

Understanding the issue is just the beginning. A strong institutional, political and social will is required to combat the issues pertaining to drinking water. Water crisis is realized as a global issue; access to safe drinking water is considered as the basic right of humans. International organizations such as United Nations Environment Programme and United Nations-Water Division are working to mitigate these problems by assisting those countries where government is unable to fight the battle alone due to political, geographical or economic reasons.

In Pakistan, a National Drinking Water Policy was approved in 2009 with an overall objective to reduce the incidence of water-related health outcomes by provision of safe drinking waters in adequate amounts.

Following strategies may be adopted for the mitigation of drinking water-related issues:

Institutional challenges: Institutional and organizational challenges are the main bottleneck in solving drinking water problems. The system that is required for provision of drinking water in the country already exists vis-a-vis a national policy, water boards and supply systems. However, inconsistent approach, lack of interest and follow-up surveillance are some of the reasons behind their poor performance. It needs a strong and objective commitment for the implementation of existing policies, rehabilitation and upgradation of existing infrastructure and to take actions against illegal practices.

Institutional and organizational challenges are the main bottleneck in solving drinking water problems.

Accreditation of vendor: Private water-providers must be allowed to operate only after registration and issuance of license. They must be provided with a rate list and monitored very strictly.

Community mobilization: Community mobilization is ultimately inevitable for an effective drinking water management regime. Unfortunately in Pakistan, a common practice to deal with various issues is to put the weight of responsibility on the government. By doing so, the common man absolves himself of any responsibility. Being a shared resource, water is the shared responsibility of government and citizens. Solution lies in a co-ordinated participation of all stakeholders.

Small-scale water conservation and treatment plants: Several small-scale technologies are being successfully used in different parts of the world. Appropriate techniques can be easily installed, tailored to the needs and resources of a particular community.

Protection of water: In order to avoid contamination, protection of water at the level of source and supply should be ensured. Surface waters can be protected by regulating industrial and municipal wastewater discharges, and by the management of catchment areas. A regular repair of pipelines can prevent the water from further contamination.

Increasing supply: Different techniques may be employed to increase the amount of drinking water. Desalination, i.e., removal of salts and minerals from water can be applied to convert unusable brackish or sea-water into consumable water. However, this technique is quite expensive and there are certain environmental tradeoffs as well.

On the other hand, the techniques of rainwater harvesting are environment-friendly, and can be improved and extended to cover more regions.

Anther mechanism to increase water supply is the use of reclaimed water. It is the water recycled from wastewater by the removal of microbes, solids and other impurities. This recycled water can be conveniently used for activities like car washing and irrigation of lawns, public parks and landscapes.

Formulation of a hazard control model: A region-and-supply-type-specific system equivalent to food Hazard Analysis Critical Control Points (HACCP) can be formulated and implemented to ensure water safety from catchment to the consumer tap. Key principles of the system can be as follows:

Drinking water quality management is not a one-window operation and requires action at various places.

In a changing climate, vulnerability to scarcity and contamination is on the rise. Water means life, so we cannot afford to sit by and become complacent on this issue. If we have to survive, we need to get our heads out of the sand and do it fast.