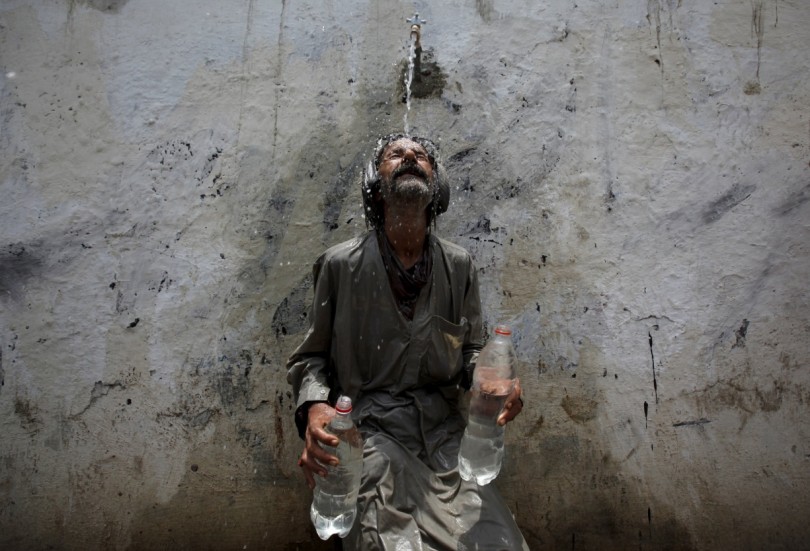 On Saturday, June 20, 2015, the southern parts of Pakistan were struck by the deadliest heat wave in many decades. Karachi has been in the epicenter of the heat wave and experienced its highest recorded temperature of 450C since 1979. Central and west districts of Karachi were the most severely affected. The Heat wave hit other areas of Pakistan, including Hyderabad, Thatta, Tharparkar, some parts of Baluchistan and South Punjab. Highest temperature was recorded as 490C in Sibi, Turbat and Larkana. Mercury dropped to 370C in Karachi on June 24, 2015 bringing some respite to the citizens. Heat wave as defined by IPCC (Intergovernmental Panel on Climate Change) is “a period of abnormally hot weather”.

The furious heat wave of 2015, popularly known as Karachi heat wave resulted into a loss of more than 1200 human lives, among around 40,000 victims brought to the hospitals of the metropolitan. Main causes of death were dehydration and heat strokes. Apparently, majority of the dead people were homeless, drug addicts and poor without air conditioning facilities and/or a direct exposure to scorching sun. The blistering heat wave caused many deaths among zoo animals as well. However, the number of human casualties was significantly less in other affected areas.

So, what caused heat wave to be that fatal in Karachi yet mild for the other affected parts where temperatures were even higher? According to the Director of Pakistan’s National Weather Forecasting Centre, the built-up of a low air pressure zone over Karachi coupled with high humidity was responsible for making the weather unbearable while in other areas high air pressure lowered the real feel of temperature at bearable scale. That is why the resumption of southwesterly winds few days after the onset of heat wave reduced its intensity. In addition, continuous hours- or even days-long power outage and critical water shortage in many areas also contributed to the wrath of calamity. The severe electricity shortfall did not spare few hospitals adding to the gravity of situation. Moreover, it was the month of Ramzan, when majority of people observe fast, which prohibits eating and fluid intake from dawn to dusk.

Heavy incidence of heat strokes and deaths created certain reinforcing problems as well. Fewer ambulances and funeral vans were available to carry patients and dead bodies. Hospitals and morgues ran out of their capacity adding to the sufferings of affected families. These are not the scenarios from some far-reached area; this is what the largest metropolitan, the economic hub of the country was going through. Seriousness of the authorities can be gauged from the fact that none of the institutions were ready to take the responsibility. They were rather busy blaming one another. Blistering weather, inadequate disaster management practices and power and water shortages acted in concert to leave the metropolitan residents at the mercy of the heat wave.

Although the exact etiology of heat wave is yet to be established, a couple of factors can be identified as the most likely contributors. One of them is the ongoing climate change consequent in the form of increased frequency and intensity of weather extremes such as cyclones, heat waves, floods, droughts and cold waves. South Asia is one of the regions to face the worst consequences. In 2015, India has also suffered from a deadly heat wave surpassing the death toll of 2500 people.

Heat waves are not a new phenomenon to this region; India has suffered from multiple heat waves in the past. Pakistan too suffered from a heat wave in May 2010 killing 18 people all over the country. Mercury level of 53.50C on May 26, 2010 in Mohenjo-daro, Sindh topped as the highest recorded temperature in Pakistan, as well as highest reliably measured temperature of Asia and the fourth highest to be recorded in the whole world.

However, with the change in global climate, the intensity and frequency of heat waves has increased and this trend is most likely to continue in future.

The other potential contributor to 2015 Karachi heat wave is the presence of El Nino phase of the ENSO (El Nino-Southern Oscillation) weather system. El Nino is characterized by a tremendous rise in sea surface temperatures across the central and east-central Equatorial Pacific followed by changes in the wind circulation patterns. It occurs every two to seven years with varying intensities and impacts can be observed in various parts of the globe. El Nino causes south Asia to be relatively warmer and drier than usual due to high summer temperatures and eastward shifting of a band of high rainfall. El Nino episodes are also expected to become more frequent and intense in the coming decades due to climate change. Although the evidence of a direct and causative link between heat wave and El Nino is lacking, its importance in affecting temperatures and the patterns of wind circulation and monsoon rainfall cannot be ignored.

The 2015 Karachi heat wave was a product of extreme weather conditions, mismanagement and a lack of seriousness in perceiving climate-related hazards. So the question is what preventive measures must be taken in order to lessen the lethality of such extreme weather episodes in the future? First and foremost is the realization and acceptance of the challenge, which unfortunately seems to be lacking within the power corridors of Pakistan. Climate change and consequent worsening of the extreme weather events is a reality now and a lot of fundamental work is needed to understand the dynamics of heat waves. Extensive reforms and strengthening in the disaster management system, massive tree plantation, extended awareness campaigns in vulnerable areas, improvements in weather forecasting, stocks of intravenous fluids and oral rehydration salts during susceptible season in the hospitals, availability of ambulances etc. are among the critical steps needed to be taken in order to combat such disaster.

Moreover, the economically weaker parts of the society are the most vulnerable. Government should take all necessary measures to uplift the quality of life of its citizens so that they may not fall an easy victim to weather anomalies.