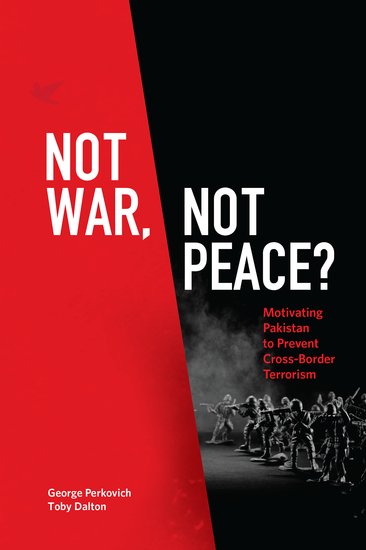 An old military adage by Moltke which says that every plan meets that of the enemy pretty much holds true in how states take forward ties of an adversarial nature. In a classic case of divergence of interests, one state tries to dissuade and force the other. The strategic fraternity uses the terms “deterrence” and “compellence” in place of the two, respectively. George Perkovich and Tony Dalton from the Carnegie Endowment for International Peace have co-authored a detailed and the first of its kind book on an issue which is central to peace in South Asia: The Indo-Pak Confrontation.

The work assiduously looks at various options at India’s disposal which could be used to “deter” and “compel” an unbridled Pakistan as India puts it. The book has extensively explained, analyzed and carried out a Cost-Benefit Analysis of all tools, ranging from conventional to sub-conventional and nuclear posturing. Besides, there are two chapters which deal with non-violent compellence and the decision-making settings in India with reference to Pakistan.  All possible means were assessed in regards their impact at the tactical, operational and strategic level. Moreover, a holistic appraisal of Indian capabilities to carry out the envisaged policies was neatly penned down.

The decision-making mechanism of India in regards national security was deemed as lamentably slow , lacking ingenuity and most importantly, the urgency to reform . Aversion to military input was another factor that was highlighted . The authors were cognizant of the benefits that were elicited by Pakistan in making a coherent national security policy vis-à-vis India owing to the grip of its military .Furthermore , India’s lack of operational intelligence, obsolescence in military equipment and the bureaucratic hitches in modernizing were also extensively discussed as factors which impeded military preparedness .

The writers traced the evolution of India’s Proactive Strategy popularly known as the Cold Start Doctrine before going into assessing the problems that baulked its official promulgation. The crux of the chapter however was an analysis on the effectiveness of the doctrine in deterring and compelling Pakistan . Would Cold Start compel Pakistan to clamp down on alleged perpetrators of attacks in India without escalating the confrontation to higher rungs of the escalation ladder?

Army-centric proactive operations against Pakistan were deemed as tactically challenging, operationally unfeasible and strategically ineffective. Tactically, the kill capability of the Indian forces is questionable owing to a well-documented need for an amelioration  in military hardware . Besides , the gap between Indian and Pakistani conventional forces has considerably lessened . Operationally , the lack of coordination between the army and the air force will hamper the success of a proactive campaign . It was rightly concluded that regardless of the success or failure of proactive operations , be it through capture of territory or attrition of the Pakistan Army, India will be unable to compel its nemesis to hit out at anti-India groups.

The escalatory nature of Cold Start was meticulously discussed by the authors . Indian limited aims will be  taken as gargantuan by Pakistan which would invoke a ferocious response . The likelihood of an escalation at both , the conventional and nuclear level  would increase due to the fog of war and  lack of depth in Pakistani territory.

The aerial offensive was dealt with in detail . Various choices of places and targets were put forward and looked at from the operational and strategic point of view . All possible options invite a strong Pakistani retaliation, be it an attack on Muridke or one in Kashmir .Besides being risky , the air option seems inadequate to compel the demobilization of anti-Indian cohorts .The authors in sum opined that an air attack would most likely cause an escalation spiral one that not only involves intensification of air operations but also those on ground and if escalation is not managed then the nuclear bogey may actually become a reality.

The authors were sensitive to the ineffectiveness of  covert operations in the attainment of compellence. Though less perilous and incendiary , covert actions may harm the reputation of the Indian state and will give credence to long-held Pakistani assertions about India. If anything , covert actions could further  activate anti Indian sentiments and actions .

The chapter on nuclear capabilities  is all-embracing . After delving into the nuclearisation of South Asia , Indian nuclear posturing was critically analyzed . The No-First-Use (NFU) policy that   India has officially maintained gives Pakistan much needed confidence and derides the credibility of deterrence . Furthermore , the authors looked at the concept of Escalation Dominance and hence analyzed the usability of India bringing nukes at the tactical level . Befitting to a logical analysis was the need to factor- in the fact that nuclear deterrence does little at the sub-conventional level. In addition , the authors were careful in making a prognosis on something which has not happened before . However , despite the pitfalls of invoking Tactical Nuclear Weapons (TNWs), they were said to  be able to threaten Pakistan at the first engagement.

The chapter on non-violent means to compel also struck a balance between what India can and what it cannot . Free from fears of armed conflict , the non-violent planks appears to be less fraught with dangers and hence attractive. However , resultantly , it does not possess a compelling effect on the state of Pakistan.

This volume is perhaps extensive in more ways than one . Though , it deliberates upon various contingencies in India’s repertoire  , it rightfully incorporates all possible Pakistani counter-measures and the thought processes which dictate them. More importantly , the book provides a realistic appreciation of actual capabilities of India and the weaknesses it needs to work on . This work is a good read for scholars, practitioners and policy-makers from both sides of the border . The analysis is dispassionate and takes into account the historical misgivings , national aims and the strategic culture which dominates the security thinking of the men that matter.