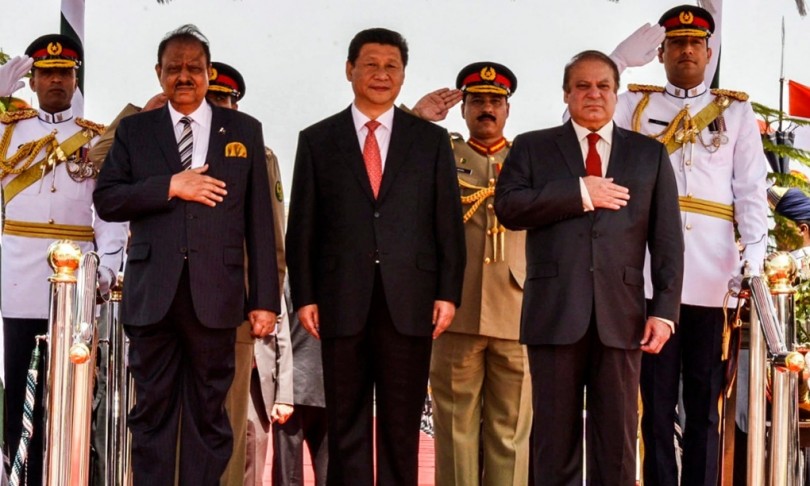 Rock balancing is a unique form of artistic expression that involves the use of different shapes, sizes and textures of rocks, by arranging them on top of one another to create a distinctive structure, without the help of additional support such as wires, adhesives or other such materials. The only force that holds the structure in place is the force of gravity. The artist has to keenly observe the rocks to find even the slightest of cavity or indentation on which the rock can rest. It is a taxing exercise, which requires a lot of skill and patience to create the right balance – that zero point or center of gravity that will hold the different pieces of rock together.

To say that Pakistan’s foreign policy, is like the art of balancing rocks, because of its unique geo-political existence, is not an exaggeration. Pakistan’s ideology, its history, security and existential concerns, economic concerns, and the fact that it is a melting pot of ethnicities, with a multitude of social, cultural, religious and political motivations and alignments, drives its foreign policy. Experts argue that Pakistan’s foreign policy should be above factors such as individual morality, political and religious ideology, and should be based on our strategic and vital national interests. Given Pakistan’s history and the other aforementioned anomalies, is it possible to devise an individual foreign policy, thoroughly grounded in cold hard reality? What is that pivotal point, the center of gravity of our external policy that can balance reality, perception and the nation’s desires?

To say that Pakistan’s foreign policy, is like the art of balancing rocks, because of its unique geo-political existence, is not an exaggeration.

Two notable events, of great relevance to Pakistan’s external policy, happened recently.  Trouble brewed up in the Arabian Peninsula, when the Yemen based rebel group Ansarullah, commonly known as the Houthis, attempted a coup d’état against the legal government of Yemen’s president Abd Rabbuh Mansur Hadi, in September 2014, which finally led to his resignation in January 2015. Upon president Hadi’s request, the Arab states, headed by the Kingdom of Saudi Arabia, intervened, and launched an offensive against the Houthi rebels, on March 25, 2015. KSA’s disquietude over the matter should not be a matter of debate at all, as Iran’s culpability in this whole situation and its territorial expansionist aspirations are not a secret from anyone; Iran has also been known to support the Houthi rebels. This is not the first time either that so called sectarian trouble brewed up right in the neighborhood of the Kingdom (recall the Bahraini uprising of 2011), therefore, KSA and the Gulf countries’ apprehension is not misplaced and does not stem from paranoia.

When Riyadh requested Pakistan to provide technical and logistic support, as well as man-power to fight the rebellion, a joint session of parliament was called by Prime Minister Nawaz Sharif to discuss the issue. PM Nawaz Sharif opened the debate in the parliament by asking the esteemed members for ‘guidance’, which they sufficiently provided by their (often, unnecessarily) wordy speeches. However, no clear policy statement was given by the government before the commencement of the session, and after five days of debate, a unanimous resolution was passed that advised the government to stay neutral in the Gulf conflict. Surprisingly enough, the Pakistan Tehreek-e-Insaaf decided to end their months long protest in favor of joining the parliamentary session on Yemen, and were the biggest proponents of ‘neutrality’ beside the Pakistan Peoples Party and the Muttahida Qaumi Movement. A few days afterwards the unanimous parliamentary resolution on Yemen and the apparent disappointment of the Gulf Cooperation Council, Prime Minister Nawaz Sharif gave a policy statement of sorts, reiterating ties of friendship and brotherhood with the Kingdom; “Pakistan does not abandon friends and strategic partners, specially at a time when their security is under threat”, he said. 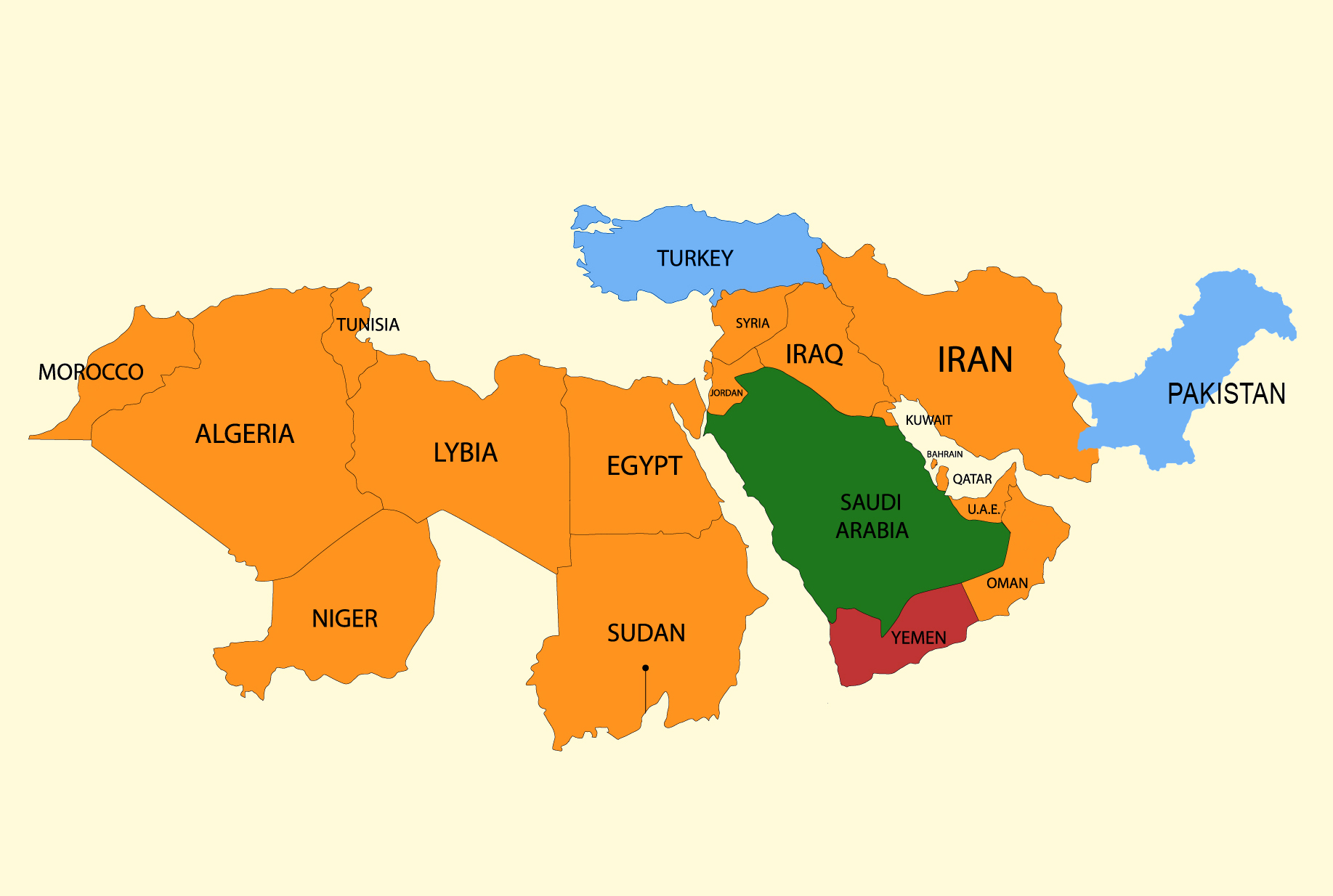 Political analysts believe that Pakistan’s foreign policy is predominantly dictated by its military leadership, and lately, there has been a kind of truce between the government of Prime Minister Nawaz Sharif and the military leadership of the country over major policy matters, after an initial rocky start. Pakistan and Saudi Arabia have always had extremely close brotherly ties, being decades old military and strategic allies, enjoying wide-scale military cooperation, including military training, defense production and sharing, and holding joint military exercises. KSA has always somehow had a role in Pakistan’s internal politics, much to the chagrin of many. Pakistani troops have been present in the Kingdom since March 29 for the annual joint military exercise, Samsam-5, and recently, a PMLN minister and information secretary, Senator Mushahidullah Khan reported that a large number of Pakistani troops are already present in different cities of the Kingdom to defend the holy places. Given these aforementioned facts, and historical perspective, why then the issue of sending military aid to Saudi Arabia upon their request, was such a matter of deliberation?

There are several theories that come to mind. One theory is, that the KSA in particular, and the other Gulf States in general, have nonetheless enjoyed all-weather friendly ties with Pakistan but these countries have a tendency of ‘investing’ in individuals, rather than the state, to push things around. To send such an important matter of foreign policy for parliamentary blessing, especially in the absence of a clear policy statement by the government, and anticipating the outcome, a powerful message was sent to our allies and friends to invest in the ‘institution’ – the state, rather than individuals.

This is not the first time that so called sectarian trouble brewed up right in the neighborhood of the Kingdom (recall the Bahraini uprising of 2011), therefore, KSA and the Gulf countries’ apprehension is not misplaced and does not stem from paranoia.

The second theory is, since assuming the office of the Chief of Army Staff, General Raheel Sharif has reiterated several times his resolve to purge the country of terrorism. As the military operation, Zarb-e-Azb’s scope has become clearer over the months, this deep cleansing process has not only included the known terrorists, their organizations, their financiers and handlers but also political mafias, and warring separatist factions in the country. Can we conceivably assume that the ambit of Zarb-e-Azb is an all-inclusive one, and which includes proxies of our sworn enemies, as well as those of our ‘friends’ and strategic allies? Does this hint at a major policy shift or is it merely a word of foreboding to all and sundry, that Pakistan will not be a playground for proxy wars?

Presently, the combined military strength of the Arab coalition is more than enough to crush the Houthi rebellion but a more overt role by Iran, can tip the regional balance and can significantly enlarge the theater of war.

The third reason and the second notable event of major relevance to Pakistan’s foreign policy, as mentioned earlier, was the two-day visit of the Chinese President Xi Jinping to Pakistan on 20th April, 2015. This visit, which was the first of its kind in the past 9 years by a Chinese head of state, was to fortify mutual cooperation between the two friendly countries, and sign energy and infrastructure development deals of the net worth of $46 billion. The main focus of this deal was the revival of the Pak – China Economic Corridor and the development of the Gwadar port. In Xi Jinping’s own words, his visit to Pakistan was like “visiting the home of his own brother”. Familial feelings aside, China, in the recent past has often shown concern over the escalation of terrorism in Pakistan. China can and will rollback any deal, unless it is guaranteed safety in return for its economic projects in Pakistan.

The flare-up of the Yemen conflict, followed by the request from our Saudi allies, at such a juncture, when mutual cooperation deals between China and Pakistan are underway, could only have one logical outcome; to ensure that China is provided with a terrorism free environment, and which is only possible if Pakistan stays clear of any new conflagration. If Pakistan decides on a more active role in the Yemen conflict, it would definitely have a spill-over effect in the country in terms of sectarian strife; the strategic rather than sectarian origin of the conflict, notwithstanding.

China, in the recent past has often shown concern over the escalation of terrorism in Pakistan. China can and will rollback any deal, unless it is guaranteed safety in return for its economic projects in Pakistan.

Despite everything, all is not lost between Pakistan and Saudi Arabia; far from it, in fact. Pakistan’s relationship with the brotherly Kingdom is still more than cordial. A high level Saudi spokesperson recently commented that Pakistan’s decision to stay neutral in the Gulf conflict was “its internal matter”. Prime Minister Nawaz Sharif and the Chief of Army Staff General Raheel Sharif, along with other top military brass, paid a one day visit to the Kingdom, on a quest to mend ties and discuss other matters of bilateral interest. KSA is the largest buyer of Pakistani Al-Khalid tanks and purchase deals of the indigenously made Pakistani JF Thunder aircrafts, along with transfer of technology, is in the pipeline. KSA’s nuclear program is rumored to be chaperoned by Pakistan, and it has repeatedly vowed to defend the territorial integrity of the Kingdom. One can safely deduce from the aforementioned facts that Pakistan’s exact external policy on Yemen maybe oblivious to all except KSA, and it is still counting on Pakistan to play a more active role if the war escalates.

Presently, the combined military strength of the Arab coalition is more than enough to crush the Houthi rebellion but a more overt role by Iran, can tip the regional balance and can significantly enlarge the theater of war. The nuclear deal between Iran and P5+1, especially has the potential of boosting Iran’s confidence to fulfill its expansionist designs in the region, despite the timeframe paraphernalia attached to the deal. On the flip side, a possible outcome of Iran’s nuclear deal could be its distancing from Russia and China, which is again a significant anomaly. This development can vastly declutter Pakistan’s external policy to make it more lucid.

KSA in particular, and the other Gulf States in general, have nonetheless enjoyed all-weather friendly ties with Pakistan but these countries have a tendency of ‘investing’ in individuals, rather than the state, to push things around.

To sum it all up, the recent development in Pakistan’s foreign policy, no matter how ambiguous it seems to the casual eye, has a clear message: Pakistan, as a responsible state, places the well-being of its citizens above everything. Pakistan enjoys friendly ties with several countries on the firm grounds of mutual respect. Pakistan intelligently follows its strategic pursuits, based on geopolitical facts rather than wishful thinking.

It seems that Pakistan has finally found its center of gravity – the focal point of its external policy, which is a right blend of its ideological background, historical perspectives and its strategic interests. It is imperative now to keep this balance, for the well being of Pakistan, and the only way it can be ascertained is if the nation stops oscillating between the extremes of belligerence and pleasing subservience.

Nadia Humayun is the operational head and editor of Stratagem magazine. She is a keen observer and commentator on regional and global politics. She can be reached at nadia.h@stratagem.pk and tweets @NadiaWadud