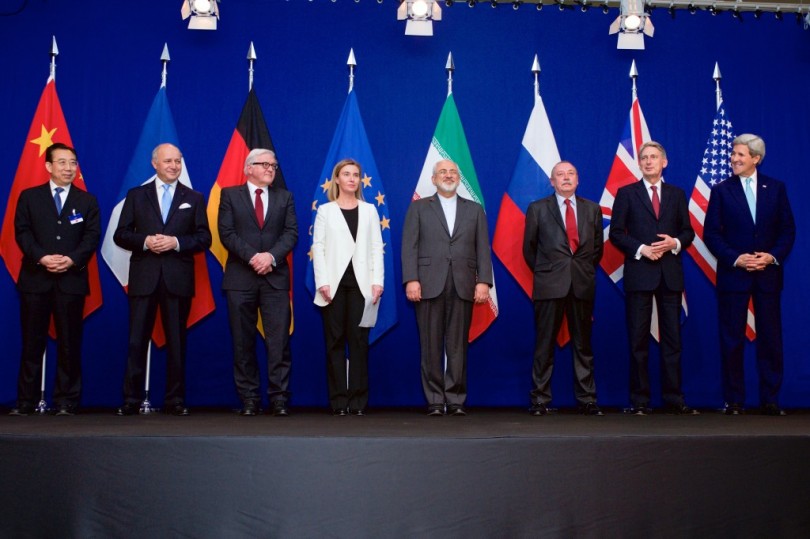 After years of negotiations and sanctions, Iran and P5+1 (the permanent members of UNSC and Germany, facilitated by the EU) finally signed a nuclear accord on 14th July 2015 in Vienna.

The negotiations towards reaching ‘The Joint Comprehensive Plan of Action’ on Iranian nuclear program began in November 2013. At that time, an interim agreement on Iranian nuclear program called ‘Joint Plan of Action’ was signed between Iran and P5+1. After signing the interim agreement, both sides negotiated for the next 16 months and in April 2015, agreed on a preliminary agreement for the final accord. Finally, in July, a final accord was signed by both sides.

Under the agreement, Iran will eliminate its stockpile of medium-enriched uranium, cut its stockpile of low-enriched uranium by 98%, and reduce by about two-thirds the number of its centrifuges for at least 15 years. Iran will not enrich uranium over 3.67% or build any new uranium-enriching or heavy-water facilities. Uranium-enrichment activities will be limited to a Natanz facility using first-generation centrifuges for 10 years.

The IAEA will have regular access to all Iranian nuclear facilities to monitor Iran’s compliance with the agreement. The agreement states that if Iran abides by the accord, Iran will receive relief from US, EU and UNSC nuclear-related sanctions.

One of the most important outcomes of the accord would be the economic relief for Iran. Prior to the signing of the accord, Iranian Rial lost two-third of its value against the dollar since 2011. Inflation was raised to 40%, GDP was decreased by 20% and the unemployment rate stood at around 10%.

Iran will now become the largest economy to rejoin the global marketplace since the breakup of Soviet Union. Supreme leader Ali Khamenei has set a target of 8% average annual growth for the next five years. Some experts have forecasted that within a decade, Iran’s GDP will surpass that of KSA and Turkey.

A post-nuclear accord Iran will be a lucrative market for investors. Iran is world’s 18th largest economy. It has the 4th largest oil reserves and 2nd largest gas reserves in the world. The 80 million population is well educated. The Tehran Stock Exchange is the 2nd biggest in the Mideast, with a capitalization of about $150 billion. The country needs an estimated $230-$260 billion of investment in oil and gas sectors.

Some countries, like Germany, have already started to show willingness to do business with Iran. German economic minister Sigmar Gabriel was the first Western official to visit Iran just four days after the signing of the accord.

Apart from the economic relief which Iran will reap, Iran will also get back an estimated $100-$150 billion dollars of frozen assets. The frozen assets are estimated to be about 25% of Iran’s GNP. Iran will use this amount to serve its interests in Mideast. Ali Khamenei in his Eid’s message said that Iran will never stop supporting its friends in the region even if the deal is approved or not. In other words, Iran will continue to support Assad government in Syria, Hezbollah, Shia militias in Iraq and Houthi rebels.

According to some estimates, Iran support to Assad government ranges from $6-$25 billion per year. Hezbollah leader Hasan Nasrallah has said that Iran will continue to support the Lebanese group despite the signing of the nuclear deal.

In order to counter the Iranian influence, KSA has reached out to various branches of Muslim Brotherhood and Hamas to counter Iranian influence.  KSA is countering Iran on many fronts in Mideast. It is leading a coalition against Iranian-backed Houthi rebels in Yemen. It also supports various anti-Assad rebel groups in Syria and it pays Arab Sunni Iraqi tribes to fight against the ISIS.

Moreover, Turkey has joined KSA to counter the growing Iranian dominance in the Mideast. Despite having tense relations over Egypt, both KSA and Turkey are now supporting each other. Turkey has supported the Saudi-led coalition against Houthi rebels, whereas KSA has pressurized Egyptian President General Sisi to give concessions to Turkey regarding Muslim Brotherhood.

The accord signed between Iran and P5+1 is a balanced deal with no clear cut winner and loser. But Iran will now get an economic boom to support its interests in Mideast which will further increase the regional tension in the Mideast. Moreover, KSA and Turkey will also try to seek nuclear capabilities for themselves which will start a nuclear arms race in already volatile Mideast.