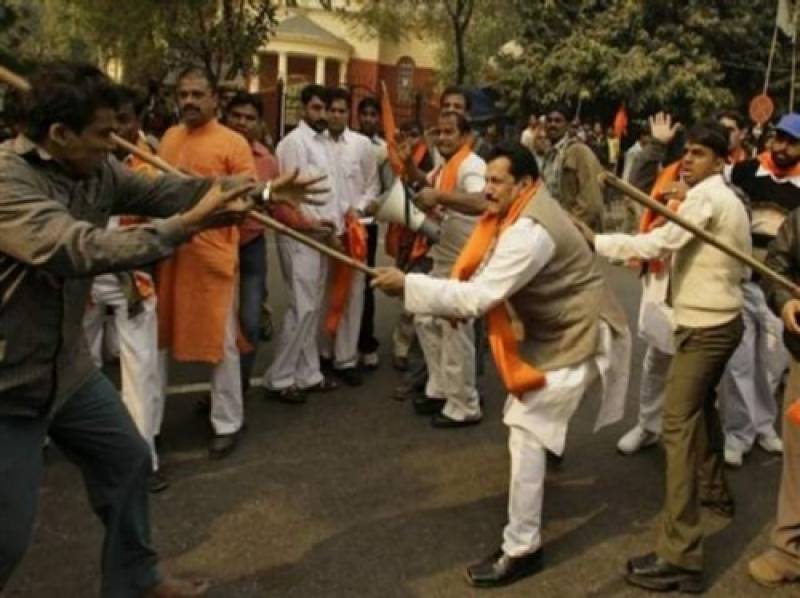 Eversince Narendra Modi assumed power back in May 2014, violent attacks and hate speeches against religious minorities in India have increased considerably.

Narendra Modi, a hardline Hindu nationalist, is a staunch follower of Hindutva ideology. The Hindutva ideology is advocated by Sangh Parivar, a collection of Hindu religious, social and political organizations, which includes BJP and RSS. The Parivar aims to transform India into a Hindu state. It also views Islam and Christianity as ‘foreign religions’ which are potential threats to India. The members of Sangh are mostly involved in violence against the religious minorities.

Modi started to demonstrate his hatred towards the religious minorities after becoming CM of Gujarat in 2001. Modi’s 13-year rule did not allow the religious minorities to feel safe and secure. In 2002, Gujarat saw anti-Muslim pogrom which claimed the lives of more than 2000 Muslims. The prime conspirators of the pogrom said that Modi allowed them three days to do whatever they want and ordered the police to side with the Hindu extremists. Moreover, his administration prevented the implementation of a scholarship scheme for deserving students of religious minorities for 5 years until it was forced by the decision of Indian Supreme Court to implement the scheme in 2013.

In September 2013, Modi was nominated as BJP’s Prime Ministerial candidate for the 2014 general elections. The 2014 elections resulted in BJP’s landslide victory which brought Modi to the top helm of affairs.

Some analysts termed Modi as a progressive who would prioritize economy over ideology after becoming the PM. On the contrary, there were analysts who pointed out his loyalty towards Hindutva ideology. John Dayal, a minority rights’ activist, testified before the US lawmakers before the 2014 elections that the BJP victory will result in the increase of governmental harassment of religious minorities.

Meanwhile, RSS-affiliated groups have been targeting the Muslim men for the so-called ‘Love Jihad’ phenomenon. Despite numerous investigations done in the past few years, no evidence has been found of such alleged activity.

On the other hand, ‘Ghar Vapasi’ programmes have been initiated to convert religious minorities into Hindus. Dharm Jagran Samiti (DJS), the organization at the forefront of these conversion programmes, has planned to end Islam and Christianity in India by 2021. Hundreds of non-Hindus have been converted to Hinduism through coercion or promises of economic benefits. A mega-plan to convert 5,000 non-Hindu families on Christmas Day last year was cancelled after national and international outcry.

Furthermore, Muslims are being killed by Hindu extremists on charges of cow smuggling and beef eating. The recent lynching of Muhammad Akhlaq by a Hindu mob on rumors that he ate beef sparked international outcry on the incident. Several Muslims have been killed by Hindu extremists in the past few weeks. This is because many Hindus worship cow as a sacred animal and consider it as a religious duty to protect it. Although, low-caste Hindus and poor Muslims eat beef because it is cheaper than the meat of chicken or goat. Moreover, Muslims slaughter cows on Eid-ul-Adha to commemorate the tradition of Prophet Ibrahim (AS).

Meanwhile, the frequency of hate speeches has increased drastically since last year. The hate speeches include – Muslim actors should be boycotted, 100 Muslims girls should be converted to Hinduism if one Hindu girl converts to another religion, Masjids should be converted into den of pigs, Muslims’ right to vote should be revoked, non-Hindus are ‘illegitimate’ – Not a single political or religious figure has been punished so far for derogatory remarks against the religious minorities.

On the other hand, Sikhs have been pursuing for change to the Article 25 of the Indian constitution which regards Sikhs as part of Hindus. Moreover, Sikhs are protesting against sacrilege of Guru Granth Sahib, Sikhism’s holy book. The protests have intensified after the death of two Sikh protestors. Furthermore, the non-recognition of Sikhism, Jainism and Buddhism as distinct religions does not allow the followers of these religions to get access to the educational preferences.

Earlier this year, Obama urged India to uphold religious freedom and he said that the incidents of religious intolerance which have occurred in India in the past few years would have shocked Mahatma Gandhi. The 2015 annual report of the United States Commission on International Religious Freedom (USCIRF) has also criticized the Modi government for failing to protect the religious minorities. More than 50 Indian writers and artists have returned back awards to the Sahitya Akademi, India’s literary academy, in protest against growing religious intolerance.

In order to deal with the rising communal violence, the Modi government should initiate effective initiatives to protect its religious minorities. Police, both at central and state levels, should ensure punishment of the perpetrators of communal violence. The anti-conversion laws should be amended to conform with international human rights standards. Apart from taking the mentioned steps, the administration should uphold its manifesto promises of preserving the cultures and protecting the sites of religious communities. The government should also punish the political and religious figures which are involved in derogatory rhetoric against the religious minorities.