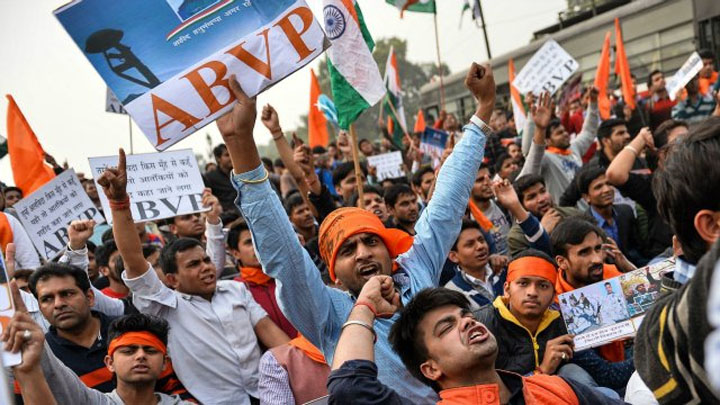 In India, the reign of Prime Minister Narendra Damordas Modi has been beset with various controversies since day one. The most recent issue to engulf the country has been the crackdown on student activists in Jawaharlal Nehru University, Delhi. The imbroglio started when a group of students asserted to be “leftwing” organized an event on 9th February, 2016 to mark the hanging of Afzal Guru, which many had termed as extrajudicial killing. The JNU administration, after protests by the Akhil Bharitya Vidyarthi Parishad (ABVP), disallowed the protests citing misrepresentation of the event.

The organizing student group still carried on with the event and held a cultural programme, art and photo exhibition. This was met by a heavy demonstration by ABVP outside the JNU VC office and demanded expulsion of the event organizers asserting that “anti national” slogans had been raised during the event. The Indian government waded into the issue with the Home Minister Rajnath Singh tweeting that there would be no tolerance for those who rose “anti national” slogans. The JNU Student Union (JNUSU) asserted that none of the event organizers were involved in the sloganeering, however that did little to deter Rajnath Singh who alleged that the protestors had support from Jamaat-ud- Dawa (JuD) leader Hafiz Saeed only to later find out that he was quoting a parody account.

A significant turn took place when Delhi police acting on a complaint filed by BJP MP Maheish Girri, arrested the JNUSU President Kanhaiya Kumar. Charged with sedition under section 124A of the Indian Penal Code, he faces a maximum punishment of life imprisonment. Seven students have been sent notices to appear before the university’s high level committee probing the matter. Eight students including Kanhaiya have been debarred from any academic activity till the inquiry is over according to JNU registrar Bhupinder Zutshi.

The arrests developed into a nationwide controversy as political parties condemned the crackdown and visited the campus to support the students. Amnesty International criticized the arrest, calling it unwarranted. Meanwhile Union Minister of State for Home Affairs Kiran Rijiju said the JNU would not be allowed to become a hub for “anti-national” activities and Jawahar Yadav, former Officer on Special Duty (OSD) to Haryana Chief Minister Manohar Lal Khattar, tweeted, “I only have this to say to the girls protesting at JNU that prostitutes are better than them as they sell their bodies and not the country.”

The University teachers have censured the arrest as “excessive police action”. Many assert that the JNU arrests are a part of campaign known as saffronization to inject ultra-far right political viewpoints known as Hindutva into the JNU campus politics. The narrative used by the BJP against the protesting students draws parallel with those which it uses against its rivals. This is evident in the BJP’s strategy of depicting every rival as a threat to national security, implicit supporter of Pakistan, backer of the Kashmiri liberation movement and having a soft corner for militants and Naxalites.

In fact in the current scenario, the greatest point of contention being raised by the Indian media and government supporters is the raising of the slogan “Pakistan Zindabad” (Long live Pakistan) during the 9th February event. This is the bedrock of the “anti national” allegations against the event. However, a twist occurred as JNUSU released a video showing that the students raising the slogan were actually members of the ABVP itself.

As of now the whole matter has morphed into a debate between those who wish to impose the RSS (parent organization of the BJP) brand of Hindutva on the rest of India and those who resist it. It harkens back to the debate over intolerance which erupted after the Dadri lynching, in which Hindutva was pitted against those wanting a more pluralistic India as well as Indian minorities, mainly Muslims.

The rise of the BJP since 1990 has exposed the schism in India between Hindutva and those that it deems as “unsuitable”. This ranges from minorities outside the fold of Hinduism as well as groups within Hinduism itself. The RSS, which is the parent organization of the BJP, has pursued an unrelenting agenda of turning modern India into a Hindu theocratic state since its independence and has actually built the tools required to achieve its aims through its extended family the Sangh Parivar.

It has achieved its aim of political ascendancy through the BJP and has steadily infiltrated the military through various means. It has also been persistent in dominating the socio cultural aspects of Indian society through NGOs and “cultural organizations”. And now it seems it has turned its guns on Indian campuses as they are the forges of sociopolitical discourse in the country. A Hindutva domination there would insure a Hindutva friendly narrative across the national academic spectrum.

The ABVP which actually predates the BJP is the student wing of the RSS has been largely active in universities across India. The JNU is the latest in its hit list thanks to help from the BJP. The BJP has replaced vice chancellors of universities, (one of which is the JNU) and subsequently seen the rise in clout of the ABVP in those universities. Previously another university, Hyderabad University, which had a new VC appointed, witnessed a suicide by one of its PhD Scholar, Rohith Vemula, a Dalit who had been dismissed along with four others for being “casteist, extremist and anti-national”. The ABVP was also found to be active there in addition and was linked to the suicide.

This foray into campus politics marks a new phase in the RSS expansion. Having been shunned for the first four decades of modern India’s history, it has now embarked on a path of resurgence. Its hold on politics through the BJP has allowed it to continue with its agenda of dominating social, cultural and economic life of India unhindered and unimpeded. This is a worrying development, not only for India’s future as a pluralistic country, but the stability of the whole region as well.