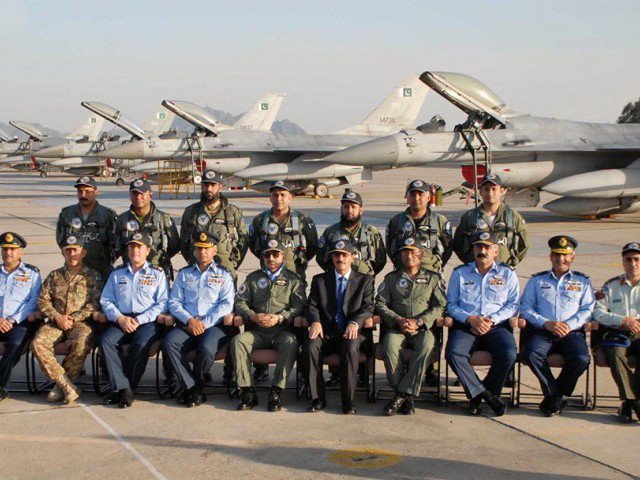 An insight into the history, current realities, and future prospects of the F-16 in Pakistan

Over the next several years, Pakistan Air Force (PAF) hopes to procure a number of new-built F-16C/D Block-52+ from the U.S. It recently succeeded in winning approval for the release of eight such birds for a cost of $700 million U.S., and it is now hopeful of adding another 10. If successful, both acquisitions would enable the PAF to build its total F-16 fleet to a force of 94 aircraft: 36 Block-52+, 45 Block-15MLU (Mid-Life Update), and 13 Block-15ADF (Air Defence Fighter).

It is apparent that the F-16 is forming an integral aspect to the PAF’s fleet modernization plans, especially in the short-term (i.e. by 2019-2020). With the JF-17 being inducted to form the backbone, the F-16s are to serve as the PAF fighter fleet’s ‘edge.’ The merits of the plan aside, the PAF’s intentions have drawn a bit of criticism, and interestingly enough, the brunt of it does not emanate from the U.S. or even India. To understand why, it is important to have some background on the PAF’s experience flying the F-16s.

The PAF has had a chequered experience operating the F-16. With the Soviet occupation of Afghanistan, the PAF had begun studying its next-generation options. At the time, there were several emerging multi-role fighter designs in the world, and the PAF chose the General Dynamics F-16. The U.S., especially in President Carter’s leadership, was unwilling to release the F-16 to clientele outside of a core group of U.S. allies in NATO and Far East Asia (such as South Korea).

Instead, the U.S. offered the Northrop F-5E Tiger II and its heavily upgraded variant, the F-5G (aka F-20) Tigershark. While a mature, venerable and popular platform, the PAF was not interested in the F-5/F-20. Rather, the PAF wanted a fighter that was designed as a multi-role platform from the ground-up, and as such, built around the technologies emerging since the late 1970s. Air Chief Marshal Anwar Shamim, the then PAF Chief of Air Staff (CAS), convinced the Government of Pakistan (under General Zia ul-Haq) of making the F-16 an integral aspect with its interaction with Washington. ACM Shamim was successful.

On 15 January 1983, the PAF took delivery of the first six of 40 F-16A/B Block-15 (ordered under the Peace Gate I program). The very first F-16 to land at Sargodha – serial number 82602 – was flown by then Squadron Leader Shahid Lateef, who would later become Vice Chief of Air Staff (VCAS). The 40 F-16s were deployed with the No. 9 and 11 squadrons in Sargodha, and the No 14 squadron in Kamra. Through the 1980s, the PAF’s F-16s secured at least 8 confirmed air-to-air kills of intruding Soviet and Afghan combat aircraft attempting to interdict the Mujahedeen’s staging grounds in Pakistan’s northwest region.

In 1988, the PAF decided to order 11 new F-16A/Bs (Peace Gate III). This order was followed by a much larger purchase of 60 F-16A/Bs (Peace Gate IV) in September 1989. With its fleet aspirations at their highest in decades, U.S.-Pakistani relations had begun to enter their lowest ebb since 1965. In response to Pakistan’s refusal to scale-back its nuclear weapons program, Washington placed an arms embargo.

Only 28 of the 71 PAF F-16s were built, and they too were stored in Arizona. And while it was bad enough that the PAF could not receive its F-16s, the initial payment it had made for those fighters ($658 million U.S.) was not refunded. The U.S. had hoped that a third party buyer, such as New Zealand, would acquire the F-16s and be the source of Pakistan’s refund. This did not pan out, and the U.S. responded by ‘compensating’ Pakistan with soybean oil and wheat.

To make matters worse, the embargo also put a severe burden on Pakistan’s capacity to maintain and operate the F-16s. Not only were new aircraft – for fleet building and attrition – prohibited for Pakistan, but their spare parts as well. The limitation thus placed on the PAF’s ability to uphold its core operational aims were clearly shown during the Kargil conflict of 1999. But 1999 was a momentous year as well as it was the birth of the Sino-Pak Super-7 multi-role fighter program, which later emerged as the JF-17 Thunder.

9/11 and the U.S.-led War on Terror resulted in a sharp renewal in Pakistan’s defence and security ties with America. By this point, the PAF’s F-16 fleet had thinned to 32 aircraft, which were split between the No. 9 and No. 11 squadrons; No. 14 had transitioned to the Chengdu F-7P. In 2004-2005, the U.S. agreed to resume the sale of F-16s to the PAF. First, 14 of the 28 embargoed aircraft were transferred to the PAF. Second, the U.S. had agreed to sell the PAF new-built F-16C/D Block-52+ fighters, of which the PAF intended to acquire 55 with an option for an additional 20. Third, the PAF sought to upgrade its existing F-16A/Bs (32 plus the 14 embargoed units from the U.S.) through the MLU program, which would equip the older F-16s with the same onboard radar and avionics suite as the Block-52+.

Financial pressures (such as the 2005 earthquake in Kashmir and the Northern Areas of Pakistan) required the PAF to scale its F-16 plans back. In 2006, the PAF formally requested 18 F-16C/D Block-52+ with an option for an additional 18, the total cost of the deal was US $3 billion. A severe downturn in the Pakistani economy prevented the PAF from pursuing the option, thereby limiting its purchase to only 18 Block-52+ (Peace Drive I). Alongside 45 MLUs as well as 13 ex-Jordanian ADFs, the PAF’s total F-16 fleet currently sits at 76 fighters. The PAF’s current plans are to steadily increase its Block-52+ fleet to the previously planned force of 36 aircraft.

The PAF’s rationale for acquiring additional F-16s stems from the following considerations: First, the fact that the F-16 is a proven and mature fighter platform. Second, the reality that the PAF possesses the core infrastructure to maintain and operate F-16A/B and F-16C/Ds, which enables it to add new airframes with ease, especially compared to inducting an entirely new fighter type. Third, the structural limitations beset by the lacklustre Pakistani economy, which does not afford the PAF much in terms of being able to fund new big-ticket acquisitions, such as fighter aircraft.

In each of the PAF’s F-16 induction phases, i.e. Peace Gate of the 1980s and Peace Drive of the 2010s, the Fighting Falcon has introduced next-generation technology to the PAF (relative to its existing systems). The F-16A/Bs of the 1980s brought with it technology such as electronic countermeasures (ECM), which enabled the PAF’s F-16s to easily jam enemy radars. No other PAF fighter at the time possessed this technology. In the 2010s, the Block-52+ brought with it a longer list of advanced air warfare technology.

For example, the Joint Helmet Mounted Cueing System (JHMCS) is an industry leading helmet-mounted display and sight (HMD/S) unit that enables the pilot to ‘slave’ their air-to-air and air-to-surface weapons to the target using the naked eye. In a dogfight, the JHMCS-equipped pilots could lock-on to an enemy using their visual cue, and in turn, fire an air-to-air missile at the enemy without having to steer the fighter in the direction of the enemy aircraft.

The AN/ALQ-211(v4) is a highly capable and integrated ECM that uses digital radio frequency memory (DRFM) technology to record and re-transmit the frequencies emitted by enemy radars. Not only can this jam and spoof an enemy aircraft’s sensor unit, but it can also heavily mitigate the effectiveness of a beyond-visual-range air-to-air missile (BVRAAM). Like the JHMCS, the AN/ALQ-211 is an industry-leading product.

The Link-16 tactical data-link (TDL) protocol enables the F-16 to operate in a highly secure voice and data-exchange system (VDES), which enables it to share and receive information acquired from friendly radars. For example, the PAF’s Erieye or Karakoram Eagle airborne early warning and control (AEW&C) aircraft could transmit their sensor feeds to the F-16, thereby freeing the F-16 to switch-off its own radar unless necessary. This enables the F-16 pilot to maintain strong situational awareness of the battlefield whilst keeping their electronic signature relatively silent.

Exposure to this technology has afforded the PAF the opportunity to understand the quality and performance benchmarks necessary to emulate this technology in its other assets, such as the JF-17. The JF-17 Block-III will incorporate an HMD/S system as well as a heavily upgraded suite of on-board avionics, such as electronic warfare (EW) and ECM. The F-16 Block-52+ (and MLU) has given the PAF a very deep understanding of critical subsystems in use with almost all of the world’s leading air forces; the JF-17 as well as any future fighter program will benefit greatly from this experience.

Having inducted the F-16A/B Block-15 and F-16C/D Block-52+, the PAF has built the infrastructure to fully operate the F-16. The challenges of inducting and harmonizing a new platform cannot be understated; it takes years for an air arm to draw out the maximum utility of a new platform. That challenge would have to be embraced in order to induct a new platform (such as the Su-35, which the PAF is purportedly interested in). Additional F-16s would not require that input, they could simply be added to the sizable fleet already in service within the PAF.

In comparative terms, even a new-built F-16C/D Block-52+ is substantially more affordable than a Dassault Rafale or Euro-fighter Typhoon. However, sensitive of the risks of doing business with the U.S., and aware of Pakistan’s limited financial means, the PAF has sought to use Foreign Military Financing (FMF) to help fund its F-16 acquisitions. The FMF is an American support program designed to help allied countries with subsidized military equipment. Moreover, the PAF will also likely pursue used F-16A/B Block-15s in use with numerous air forces around the world. It could also take a look at the hundreds (if not more) F-16C/D Block-25 and Block-32 fighters in storage in the U.S., which could be acquired using the Excess Defence Articles (EDA) program. These used F-16s could be acquired for cheaply, especially if acquired without upgrades and/or structural life-extension.

With the above in mind, it should be obvious that the PAF’s desire for F-16s is drawn from grounded pragmatism. It may not seem like it on the surface, hence the derision up to some level against the PAF for being “fascinated” by the F-16. That is an unfair assessment, especially in light of the technology exposure the F-16s have attained and the undeniable reality of the cost-savings they offer to the PAF, especially when one considers their combat-proven record. That said, it would be hypocritical to suggest that the PAF is not worried about the F-16’s longevity, hence its active pursuit for a fifth generation fighter solution.

Bilal Khan (B.A, M.A) is a defence and security analyst based out of Toronto, Canada. He is the co-founder and chief analyst of the Quwa Defence News & Analysis Group, an independent organization devoted to discussing defence and security issues in South Asia, the Middle East and Africa