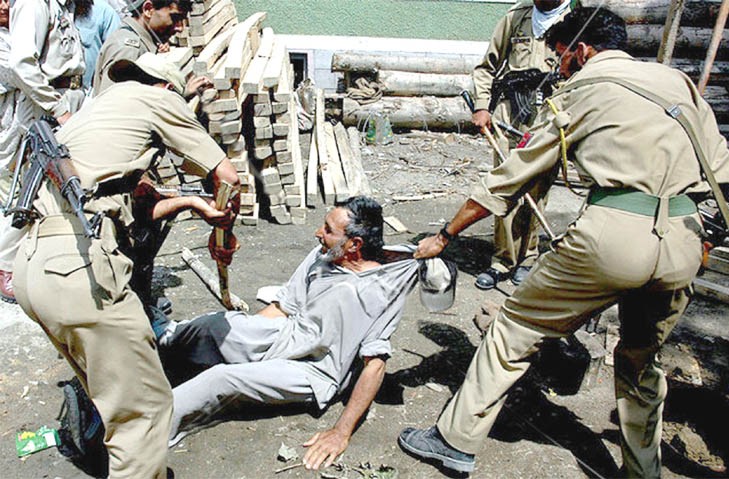 Throughout the colonial period the European powers demarcated boundaries in a way which resulted in the beginning of harsh enmity between the prospective sovereign states. Kashmir – the unfinished agenda of partition of the sub-continent between Pakistan and India – is one such disputed boundary. The genesis of the row rests in state’s dubious accession to India in 1947 which Pakistan challenged on the grounds that majority of the population of the state was Muslim. India referred the issue to the United Nations when war broke out over the disputed land with Pakistan in 1948. Subsequently the international body asked for ceasefire and has passed 23 resolutions for the solution of the dispute on the basis of the right of self-determination through a plebiscite under UN supervision but India has actively obstructed the process by whatever means at her disposal. Having facilitated the instruments of annexation fraudulently and later declaring Jammu and Kashmir as an integral part of India in complete disregard to UN resolutions, international customs and promises made to the people of Kashmir, Indian administration in a quest to consolidate its power over the state has resorted to massive abuses of human rights and discriminatory practices. A deadly struggle is going on in the Indian controlled predominantly Muslim territory of Kashmir where Indian military and paramilitary forces are brutally crushing freedom seekers seeking independence or union with Pakistan. Whenever Kashmiris have stood up to demand their legitimate right of self-determination, Indian forces have unleashed a horrific reign of terror on the unarmed civilians.

The basic provision of international law as pronounced in the Universal Declaration of Human Rights (1948) stipulates that “individuals should not be deprived of their lives arbitrarily. Everyone has a right to life, liberty, security, freedom and equality”. However, all these international conventions, treaties, declarations and customs become inaudible in IOK where suppression is a matter of routine. Nearly 700,000 Indian security forces have been deployed in IOK who have killed nearly 93,000 Kashmiris. Mass killings, forced disappearances, torture, rape, extra judicial killings, fake encounters, mass graves, political repression and suppression of freedom of speech has become an integral part of the day to day life.

The provisions of human rights and security are categorically stated in international law. States after becoming parties to international human rights treaties assume obligations and duties to respect, protect and fulfill human rights. International Covenant on Civil and Political Rights (ICCPR), a multilateral treaty adopted by UNGA and a part of International Bill of Human Rights, commits the state parties to respect civil and political rights of individuals including right to life, property, freedom of speech, equality and right to fair trial. India acceded to ICCPR on April 10, 1979 and undertook that:

“Any person whose rights and freedom as herein recognized are violated shall have an effective remedy…, any person claiming such a remedy shall have a right thereto determined by competent judicial, administrative and legal authorities; [and] to ensure that competent authorities shall enforce such remedies when granted”

However, the pattern of legal breakdown in Kashmir violates the basic canons of international human rights. The legal system in Kashmir is riddled with delays and backlogs repudiating the victim effective remedy along with procedural duplicity for the claimants and the military forces which are advantageous for the latter as well as draconian laws which facilitate abuses to be committed with impunity. Government actors fail to investigate claims of the victims which are primarily against the security forces and refuse to participate in investigations and proceedings regarding human rights abuses. Illegal detentions and arbitrary arrests which evidently run contrary to the writ of the habeas corpus as codified in the international bill of human rights manifests how rights of detained persons are systematically ignored in Kashmir. Several human rights watchdogs in their annual reports have frequently highlighted the discriminatory laws being practiced in IOK from which stem many cases of human rights violations. Amnesty International in its report in 2011 highlighted that Public Safety Act (PSA) is used to secure long-term detention of individuals without charge and trial and special immunity has been granted to the security forces against whom no legal proceedings could be started without prior sanction from the central government. Likewise, Armed Forces Special Powers Act (AFSPA) grants unprecedented powers to the security forces to search and arrest without warrants and shoot unarmed civilians with immunity from prosecution. Strong condemnation from the international human rights organizations against these laws has certainly fallen on deaf ear and Indian administration continues to dishonor its treaty obligations and fundamental norms of international human rights law by detaining people for lengthy periods without allowing them to question their detention in the court.

International humanitarian law is applied during international or internal armed conflict. As the history of Kashmir is plagued with war, Human Rights Watch in 1990s professed that the struggle in Kashmir does meet the threshold of an armed conflict. As such there have been repeated cases of violation of Geneva Conventions in occupied Jammu and Kashmir. According to common article 3 of the Geneva Conventions:

“Persons taking no active part in the hostilities, including members of armed forces who have laid down their arms and those placed hors de combat by sickness, wounds, detention, or any other cause, shall in all circumstances be treated humanely, without any adverse distinction founded on race, color, religion or faith, sex, birth or wealth, or any other similar criteria”

However, Indian security forces have consistently sullied the International Humanitarian Law. According to Wikileaks the International Committee of Red Cross briefed American diplomats regarding widespread torture and sexual abuse in prisons of Kashmir during 2002 to 2004. Rape continues to be the major tool of Indian repression against women whom they see as sympathizers of the men who want to throw away the yoke of subservience.  In raping them, security forces aim to punish and humiliate their entire community. According to Medecins San Frontieres (MSF) women in Kashmir have suffered enormously since the beginning of the freedom struggle in 1990s. Kashmiri women are among the worst sufferers of sexual violence in the world. In the guise of crackdown against what Indian authorities call ‘terrorists’, security forces use indiscriminate firings on unarmed protestors, resort to extrajudicial killings of the detainees and use disproportionate force while there is no one to probe in to the matter.

The issue of Kashmir remains the longest unresolved issue on the agenda of United Nations. The conflict not only continues to raise the specter of war between India and Pakistan but also fuels wider regional instability and has contributed to gross human rights violations. Human rights abuses committed by Indian security forces in the state have remained shrouded in mystery with little international coverage since India has restricted the movement of independent observers and media in the Valley. Successive Indian governments have adopted discriminatory policies against those who have stood up for their rights in Kashmir Valley and have installed puppets to keep up the pretense of union with India. The overwhelming presence of military and paramilitary forces in Kashmir resorting to disparate use of force ignites agitation among the people of the state. Laws evoked in Jammu and Kashmir violate India’s international obligations and is an impediment to achieving peace. Also, it would not be wrong to say that the human security situation in Kashmir has largely been ignored by the global community which presents a substantial challenge to the international human rights regime. States are not willing to compromise on their sovereignty or their monopoly of power over their subjects by allowing an international body to apply constraints on its domestic authority. India’s human rights violations in Kashmir are deliberate, systematic and state sanctioned, yet apart from publishing annual reports, the Human Rights Watchdogs have not been able to remedy particular violations.