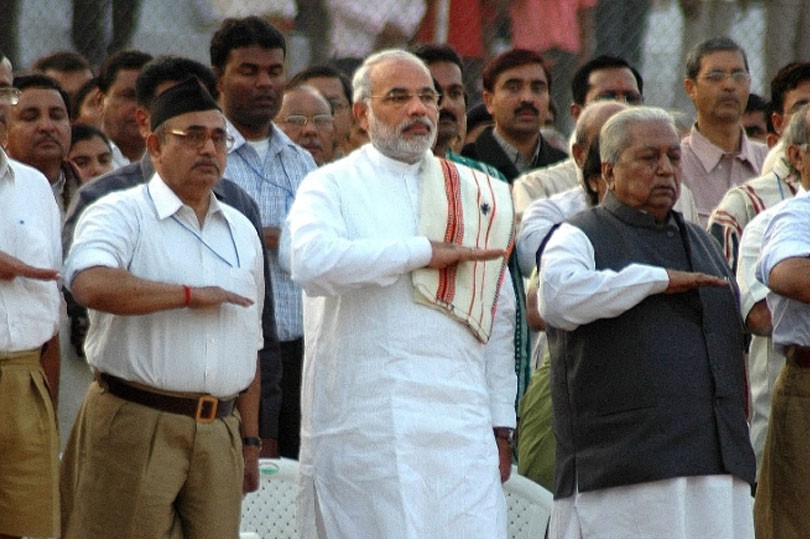 Famed Kannada scholar MM Kalburgi was shot dead at his home in Dharwad on the morning of 30th August, 2015 by two assailants on a motorcycle. The identity of the assailants the motives behind the murder are unknown at this point. Kalburgi was in hot waters with Hindutva activists hunting him for hurting “Hindu sentiments” and a former head of Sri Ram Sena, a fringe group notorious for moral policing, was taken into custody by the Mangalore police after posting a tweet celebrating the murder.

Kalburgi is one of a long line of activists murdered due to their opposition to certain religious practices prevalent in India. Another noteworthy news item is the bail of Swami Aseemanand, the main accused in a string of bomb blasts including the Samjhauta Express Train bombing. In the Kerala state of India, the socialist CPI(M) and the ruling BJP party who are considered religious rightwing have been engaged in a state of armed conflict with hundreds of workers on both sides being killed. In other parts of India, minorities, primarily the Muslims, have been on the receiving end of various discriminatory practices like ban on beef consumption and cow slaughter as well as facing violence.

Many have started to point towards this worrying trend and asserted it to be a part of the rise of saffron terror or Militant Hindutva. Saffron terrorism is the use of violence or threat of violence, inspired by Hindutva, which is the predominant form of Hindu nationalism in India as well as Nepal. A proper overview of Saffron Terror groups is required, in order to analyze the threats of Saffron terrorism.

The Ideology of Hindutva

Hindutva, or “Hinduness”, a term coined by Vinayak Damodar Savarkar, in 1923, is the main driving force behind Saffron terror in India and Nepal. According to the Oxford English Dictionary, Hindutva is an ideology seeking to establish the hegemony of Hindus and the Hindu way of life, and according to the Encyclopedia Britannica, “Hindutva (or Hinduness) is an ideology that seeks to define Indian culture in terms of Hindu values”. Hindutva revolves around the following principles:

Hindutva is advocated to have been established in Nagpur, Maharashtra through the formation of the Rashtriya Swayamsevak Sangh or RSS (National Volunteer Organization or National Patriotic Organization). Hindutva is considered by many scholars, including Dr Ram Punyani, as a reaction of High caste Hindus against the lower caste Dalit awakening. Therefore, even now the ideology is famous among high caste Hindus, although now it has also started spreading in Indian urban centers.

As discussed above, Saffron Terror is an analogy used to describe acts of terrorism motivated by Hindu nationalism or Hindutva. Praveen Swami coined the term, in 2002, in a Frontline magazine article. The Indian government used the term the first time when former Home Minister of India P. Chidambaram urged Indians to beware of “Saffron terror” in August 2010 at a meeting of state police chiefs in New Delhi. Most of such acts are perpetrated by members, or alleged members of Hindutva organizations as well as lone wolves.

Acts of Saffron terrorism as well as famous examples includes:

India occupies a significant place in Hindutva ideology. After all it has the world’s largest Hindu population and is the birthplace of the Hindutva ideology, as well as housing several Hindu holy sites. While some commentators consider Saffron terrorism to be a recent phenomenon caused by the rise of Muslim militancy, this assertion is negated by the formation of RSS even before partition, and its path of violence through the decades after.

A militant landscape of Saffron terror groups can be formulated consisting of: 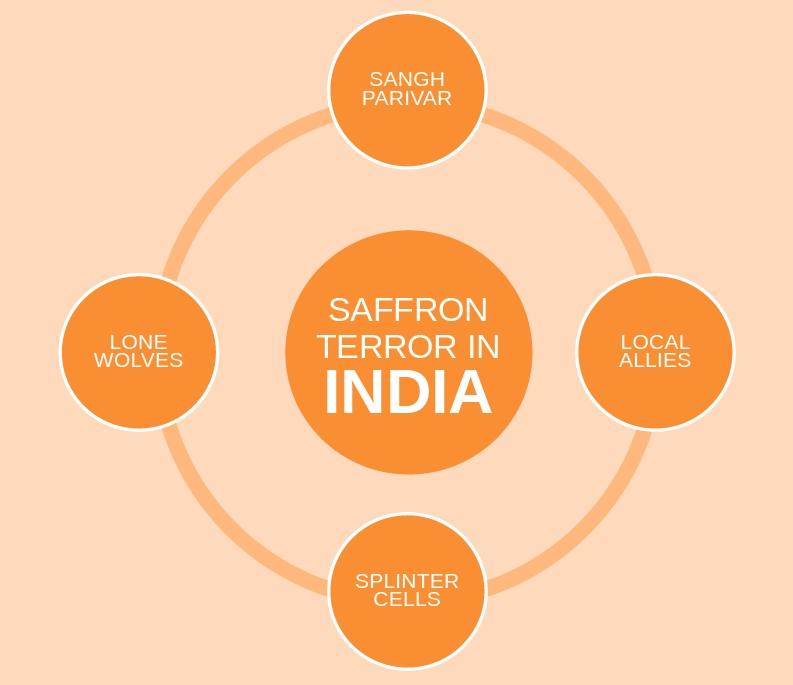 Sangh Parivar translates into Family of Associations. The Sangh Parivar is a network of Hindutva organizations with the same ideological goal of implementing Hindutva agenda and often overlapping membership which gravitate around the RSS.

The main groups of the Sangh Parivar include: 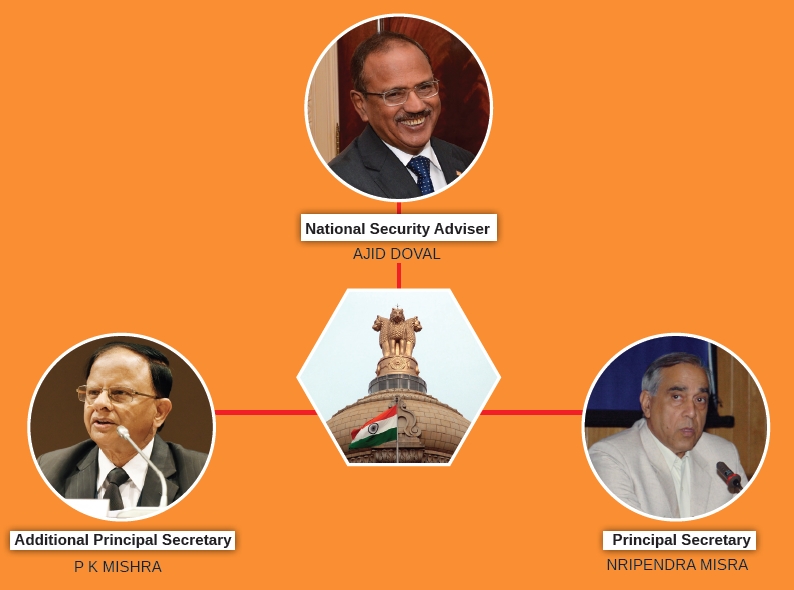 Local allies are those entities which are allied to the Sangh Parivar, and may or may not fully follow the ideology of Hindutva, and are not under the direct control of the RSS. Most of these are local groups, such as political parties who ally with the Sangh Parivar due to shared interests or acquisition of other benefits in pursuing a joint agenda. They often bolster Sangh Parivar ranks by supplying men and material during times of need, as well as carrying out violent actions on their own.

Splinter Cells are those groups, which although fully follow the Hindutva ideology, but have rebelled against the RSS control, and now follow an independent path in implementing the Hindutva agenda. Hindutva Splinter cells have emerged to be the most violent of saffron terror groups even going as far as targeting the Sangh Parivar for its “ideological betrayal” to the Hindutva cause.

“A lone wolf or lone-wolf terrorist is someone who commits violent acts in support of some group, movement, or ideology, but does so alone, outside of any command structure, and without material assistance from any group. Although the lone wolf prepares and acts alone, he/she may be influenced or motivated by the ideology and beliefs of an external group.” In this case the movement or ideology is Hindutva.

Nepal occupies an important position in the ideology of Hindutva, it was the only Hindu state in recent existence during the time of the monarchy who ardently tried to implement Hindutva’s “One faith, one language, one state” agenda to cement their own rule. The Nepali state’s ties to Hindutva grew in the 1960s, after King Mahendra overthrew an elected government, and established the autocratic Panchayat system, and started using Hindutva to offset secular opposition from within and without.

Mahendra’s successor, Birendra, continued to maintain the ‘Hindu kingdom’ agenda. After Birendra’s killing in 2000, the new king Gyanendra, sought to utilize Hindutva after he assumed the throne in 2001, meeting Indian religious leaders along with those of the RSS and its affiliates. In April 2006, crippling mass demonstrations in Kathmandu ultimately forced King Gyanendra to step down and hand power to SPA. Maoists fighting Hindutva then declared a ceasefire. On 18 May 2006, Nepal’s new parliament publicly declared that Nepal would no longer be a Hindu Kingdom but a secular state. An interim government was formed that included the Maoists.

Nepal’s Hindutva (Hindu nationalist) elements, with backing from Hindutva forces in India, immediately increased their intolerant rhetoric, and exploited the confusion of the Nepalese  Hindu masses, in order to reverse the declaration of secularism. Instead of Muslims, the main targets of Nepalese Hindutva were “Christian missionaries” who were behind the secular state declaration.

Hindutva groups in Nepal encompass the Hindu Swayamsevak Sangh (HSS) formed in 1992 by Nepalese students inspired by the RSS. The HSS demands a return to a Hindu state, calling for an end to cow slaughter, and a law ensuring that only Hindus can be appointed to the country’s highest posts. Further, while the group posits itself as a non-violent movement, its members emphasize that they have a right to “self-defence”, an excuse often used by Indian saffron terror groups to commit violence. Political Hindutva is manifested in the Rashtriya Prajatantra Party (Nepal), a party with four seats in the Constituent Assembly. It demands a reinforcement of the 1990 constitution, which ensured a constitutional monarchy in a Hindu state.

Saffron terror group who have evolved into far more deadlier strains of violence are Nepal Defence Army (NDA) and the Ranvir Sena (Nepal). The shadowy NDA was formed by Ram Prasad Mainali, a former Maoist, with the main aim to restore Nepal’s Hindu monarchy. It was responsible for a string of bombings that targeted mosques, colleges, business centers and government offices, as well as assassinations of prominent personalities, like college principals and intellectuals, before being busted by authorities in September 2009. The Ranvir Sena, which shares its name with the landlord militia fighting Naxalites in Bihar India, desired to reinstate Hinduism as the state religion. Formed by Vinod Kumar Pandey, a 41-year-old civil engineer, who received his degree from Chennai, the group used the Internet to get knowhow about explosives and used a rented house as a laboratory besides being involved in extortion, abduction and blasts in the Terai plains. This group too was arrested in 2009 before it could enact a bombing campaign throughout Nepal.

The increasing level of Saffron terror groups, particularly with a Hindutva government in power, raises the stakes of a Saffron terror surge. Other groups like Muslims and Buddhists are facing their own militants, and saffron terror can highly aggravate the situation. Indeed, Saffron Terror’s targeting of Pakistan has made it more than an internal Indian problem with the Samjhauta bombings. Rahul Gandhi considers the RSS more dangerous than the Lashkar-e-Taiba, while Nepalese fear for religious harmony with the rise of Hindutva. It is pertinent that stakeholders across the region start paying attention to Militant Hindutva as it could become a major security threat in the near future, if not the present. Perhaps, the greatest casualty of militant Hindutva will be the beautiful and peaceful religion of Hinduism, if this threat is not tackled in time.