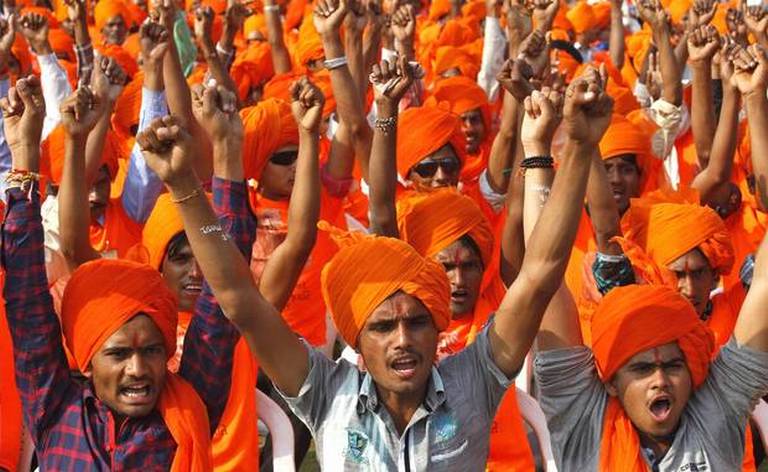 Recent times have seen an exacerbation of the two Indian political parties in partnership, the Shiv Sena and the ruling BJP. The recent round of fighting between the two was initiated after members of the Shiv Sena stormed the BCCI (Board of Control for Cricket in India) to prevent a meeting with Pakistani officials as well as the manhandling of an Indian activist for participating in a Pakistani book launch. In response, the BJP merely told the Sena not to mix “politics with sports” and no case was registered against the culprits whose faces were shown around the world in both cases.

The Shiv Sena retaliated by blasting the BJP for lynching of people over beef consumption as well as the crimes against the Dalit community allegedly perpetrated by members of the Sangh Parivar, the parent body of the BJP. It also defended its violent acts as well as called for the storming of Pakistan à la Ram’s conquest of Lanka. However, despite his fiery rhetoric he stopped short of ending the alliance between the two parties.

The strain between the two parties has been building since before the elections that saw the BJP rise to power. The Sena has always been uncomfortable with the idea of accepting Modi and Amit Shah as BJP leaders and the Sena openly censured the move. After Modi-led BJP swept the polls, the Sena protested not being offered any plum portfolio in the Cabinet.

Four months later, after the BJP emerged as the single largest party, the Sena reluctantly backed the alliance. Once again the offering of minor portfolios was a major bone of contention. After the most humiliating defeat of the BJP at the hands of the AAP in Delhi assembly elections, Shiv Sena was the first coalition partner to publicly attack Modi and cheer at the loss. Shiv Sena opposed the controversial Land Acquisition Bill and did not even attend the meetings as well as routinely opposed the BJP CM of Maharashtra, Devendra Fadnavis. It has also opposed the meat ban during a Jain festival.

Political commentators point towards the shift of electoral fortunes that have rattled the Sena driving it towards more extreme measures. The BJP began to dominate the 25 year old alliance after acquiring more seats than the Sena. The Sena is losing the state, including its stronghold of Mumbai and is struggling to regain its base in Mumbai, a city it has ruled for over two decades. Likewise Charges of corruption in the Sena-controlled BMC has upset the party coupled with its leadership aversion to becoming a subordinate of the government have seemed to have left the Sena in dire straits. Also the BJP’s belief that it can through a solo flight capture all seats including the Sena’s prized civic bodies, is another destabilizing factor for the Shiv Sena’s extremely belligerent attitude and actions.

However there is another added dimension to this tussle, that of the Hindutva variant of Hindu nationalism. Both BJP and Shiv Sena are proponents of Hindutva, the BJP being a political arm of the RSS; the nerve center of Hindutva in India, and the Shiv Sena a relative latecomer but one of the most steadfast Hindutva advocates in India. Both also are notorious for using violence for their Hindutva agenda be it in the form of the Babri masjid riots, the 2002 Gujarat pogrom of Muslims or hate and violence directed against Pakistan; the foreign demon of Hindutva.

The ascendancy of the BJP has seen the rise of Hindutva across the country. Murders are taking place over allegations of eating beef, consumption of beef as well as other meats have been banned in quite a few states, lower caste Dalits are facing increasing violence such as being burned alive and being raped. Other Indian minorities primarily Muslims are facing acceleration in hate crimes and state oppression.  The Sikh community is protesting across the world including India over the desecration of their holy book leading to the deployment of the army in Amritsar, Ludhiana and Jalandhar. An Austrian couple was assaulted by extremists over a tattoo and police instead blamed the elderly couple for incitement. The US state department report on religious freedom has cited India over the increasing repression of minorities including forced conversions under the “Ghar Wapsi” campaign. Indian and global academics are protesting against the attacks on civil and religious freedom by the current BJP government.

Sena leader Uddhav Thackery, a major tenant of Hindutva, in his latest speech called for imposition of the Uniform Civil Code (that would cause the end of several rights for minorities). The Sena-BJP is conceivably a clash within Hindutva itself and a transmutation of this ideology into a more extreme and less RSS controlled phenomenon. The Sena has been in the news for manhandling peaceful activists, minorities, calling for genocide, training suicide bombers, physical intimidation and other violent acts.

The Sena is eager to depict itself as the foremost champion of the Hindutva cause in order to survive. But it is difficult for it to do so due to it being a non-member of the Sangh Parivar which is why it is on a warpath to legitimize its own place in Hindutva politics. Extreme violence in response to Sangh Parivar dominance has been seen before in the Sanatan Sanstha and Abhinav Bharat, who rebelled against RSS authority.

The Sena’s fight for supremacy and survival may as well result in more intrastate violence which will make India a less likely destination for all types of events like sports matches especially those in which Pakistanis are participating. Pakistanis were once before targeted by Abhinav Bharat in the 2007 Samjhauta express bombings and are the Sena’s favorite targets too. There is a need for the Pakistani government to regulate travel of citizens all across India and also keep a focus on happenings within India as well as utilizing a diplomatic offensive to highlight the danger of Hindutva extremism within the Indo-Pak subcontinent.