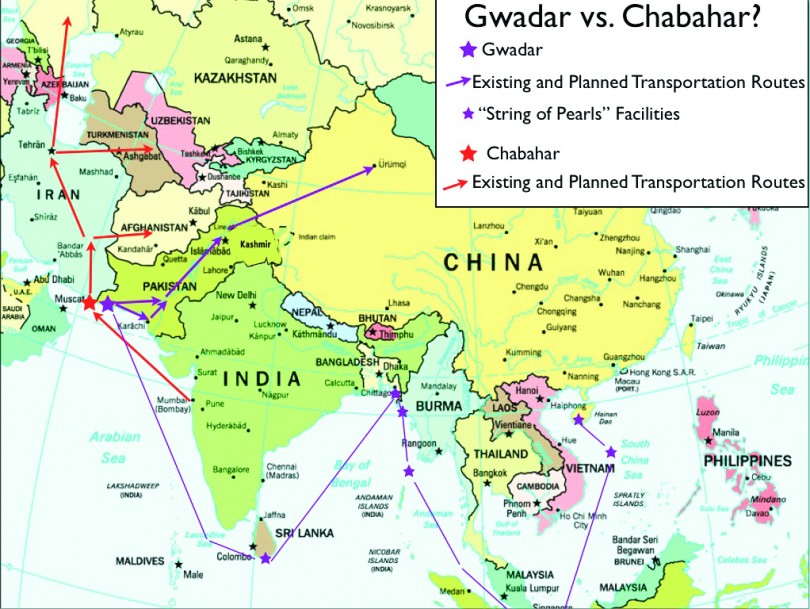 The dominating story of the recent visit by the Chinese president Xi Jinping to Pakistan has been the China–Pakistan Economic Corridor (CPEC). It is a development megaproject, which aims to connect Gwadar Port in southwestern Pakistan to China’s northwestern autonomous region of Xinjiang, via a network of highways, railways and pipelines. On the whole construction costs are estimated at $46 billion, with the entire project expected to be finished in several years. The CPEC has been hailed by many as a game changer that would help integrate Central Asia, South Asia and the Middle East, as well as, rejuvenate Pakistan’s debilitated economy.

Significance of the Route

As it can be ascertained from the map, The China-Pakistan Economic Corridor (CPEC) is not a solitary road; it is a vast network. It will spur the growth of industrial zones supported by energy plants, linking Kashgar in China to Gwadar.  All provincial capitals would serve as fundamental nodes for the CPEC, upon which the corridor would be constructed. Balochistan should be the primary beneficiary of the project. The other provinces, especially conflict wrecked Khyber Pukhtunkhwa, will also benefit from this megaproject.

The China-Pakistan Economic Corridor (CPEC) is not a solitary road; it is a vast network. It will spur the growth of industrial zones supported by energy plants, linking Kashgar in China to Gwadar.  All provincial capitals would serve as fundamental nodes for the CPEC, upon which the corridor would be constructed.

Traditionally the region has derived economic benefit from tourism attracted by its exotic beauty and awe inspiring environment. However, the American global campaign in the name of combating terrorism, as well as militancy in the region has caused an adverse effect on tourist activity. Despite a number of people travelling from Gilgit-Baltistan to the rest of the Pakistan in search of jobs and education, there has not been much socio-political integration. The CPEC will change all of that.

The CPEC will not only solve the problems faced due to transportation and communication but will also diversify the source of income for the people of Gilgit-Baltistan. It will also enhance socioeconomic integration of Gilgit-Baltistan with the rest of the country by giving it a primary role in the vital CPEC project.

The CPEC will also pass through the restive provinces of Khyber Pukhtunkhwa and Baluchistan. The CPEC can perform a critical function in conflict management in these areas. As poverty is one of the main drivers, if not the prime driver of militancy, development induced by CPEC will go a long way in minimizing it. The CPEC could revolutionize the existing socio-economic setting of Baluchistan by dramatically altering its communication & transport sector and revamping its infrastructure.

The CPEC is intended not only to make available to China, the shortest energy supply route from Africa and the Middle East but to also augment trade and cooperation, thus reinventing Pakistan as an energy corridor between South Asia, China and Central Asia. The Gwadar port ultimately will offer China an entry point into the Arabian Gulf and consequently widen its geopolitical influence. The CPEC as well as the new Silk Road will also become an engine of economic growth for China’s underdeveloped western provinces, including Xinjiang, by opening their markets to global competition, and help them come to par with China’s developed coastal cities and provinces.

The CPEC project while it is underway, presently also faces a variety of challenges that seek to undermine its beneficial impact for all involved. The threats can be categorized into internal and external, as well as, divided along political, economic and security themes.

Political instability is the greatest impediment to any project around the world and the CPEC is no exception. In September 2014, Chinese President Xi Jinping’s visit to Pakistan was cancelled in light of the sit-ins in Islamabad led by Imran Khan’s Tehreek-e-Insaaf (PTI) and Pakistan Awami Tehreek (PAT). While the issue has been resolved between the government and the PTI through a judicial commission and the PTI has played an appreciative role in calling for national support for the CPEC, the danger has not eroded. All sides should refrain from initiating a course of action that could lead to impairment of this nation building enterprise.

Iran has a stake in the CPEC through the proposal to link the Iran–Pakistan gas pipeline with China, which has been described as a “common interest” between the three countries.

Recently a new course of action has been initiated by some sub-nationalist parties that are alleging a change in the routes by the Federal government, that would only favor the eastern provinces of Pakistan and deprive the western provinces. Despite this allegation meeting no facts on the ground, the Pakistani and Chinese governments have tried to allay the fears, by interacting with the political parties that are making the allegations. There is also a stark need to engage the common man on the ground to stop the public from taking part in acts such as agitation that could halt work on the CPEC.

Political challenges also exist on the International front. There is talk of India approaching a diplomatic route to stop the construction of the CPEC in Gilgit-Baltistan, which it considers to be an integral part of its territory. The USA also has been apprehensive of Chinese strategic access to the Arabian Sea and its presence in the region. It has reportedly tried numerous times to dissuade Pakistan from involving China in the development, including advocating the port authority of Singapore as a suitable operator for Gwadar, at one time. Its significance as a provider of military and financial aid to Pakistan, as well as the second largest export destination after the European Union, could make it difficult to ignore. There is a stark need to engage in a diplomatic campaign to hold off any such attempts by foreign governments.

While the Chabahar project is not yet started due to ongoing talks on the Iranian nuclear issue, the Gwadar port has already become functional. However there is no need for contention between these two ports. Iran has a stake in the CPEC through the proposal to link the Iran–Pakistan gas pipeline with China, which has been described as a “common interest” between the three countries.

Also the Indian involvement in Chabahar is linked to Pakistan’s refusal to allow India access for transit to and from Afghanistan, so India sees Iran as the next-best option. If Pakistan extends transit permissions to India, then India may not be interested in building up Chabahar. In recent years India has been particularly active in engaging Central Asian states for the sake of pursuing energy deals. India can be easily accommodated via the CPEC itself through eastern interface in Punjab and Sind and transformed into a stakeholder in the success of both Gwadar and the CPEC.

Security concerns remain the most primary challenge to the CPEC as yet. An arc of militancy stretches from Xinjiang to Gwadar consisting of groups like the East Turkestan Islamic Movement (ETIM), Tehreek-e-Taliban Pakistan (TTP), Lashkar-e-Jhangvi (LeJ), Daesh (ISIS),Balochistan Liberation Army (BLA), Balochistan Liberation Front (BLF) and militant wings of political parties. Most of these groups may not have an enmity with China itself but rather intend to use attacks on Chinese interests like the CPEC as a means to deal with the Pakistani state. There are also indicators of foreign intelligence agencies engaged in espionage against the CPEC. In fact, reports of formation of a specific desk to deal with the CPEC at the Research and Analysis Wing (RAW) have been widely circulated.

Inside China, Xinjiang has been classified as the soft belly of China due to low development and ethnic tensions primarily concerning the Muslim Uyghur population. For the Chinese the ETIM is a manifestation of the three evils of terrorism, extremism and separatism. The ETIM has been further augmented by training from ISIS where instances of Uyghur militants being inducted in training camps have been seen.

The Xinjiang Uyghur Autonomous Region (XUAR) emerged as a major trouble spot domestically for China following violent riots and terrorist attacks within Xinjiang and as far away as Kunming and Beijing. Faced with this unrest, Beijing implemented a two-pronged strategy. First, the central government unleashed a severe crackdown on terrorist activities, resulting in mass arrests and trials. Second, Beijing doubled down on its previous strategy of promoting economic development in the region as a way of addressing ethnic tensions. The central government recognizes that unemployment and poverty among Uyghur is a major driver of discontent.

Pakistan Chinese friendship has been hailed as ” higher than the mountains, deeper than the oceans, sweeter than honey, and stronger than steel “. As China’s friend, it is up to Pakistan to counsel it on appropriate ways to deal with issues of the Uyghurs, who along with other Chinese have a deep connection with common Pakistanis. Some measures to promote more integration of the Uyghurs go against Islamic teachings, which may aggravate the situation. Measures that accommodate religious values will go a long way in battling militancy in Xinjiang and breaking the hold of outfits like ETIM.

Inside China, Xinjiang has been classified as the soft belly of China due to low development and ethnic tensions primarily concerning the Muslim Uyghur population. For the Chinese the ETIM is a manifestation of the three evils of terrorism, extremism and separatism.

Inside Pakistan itself a range of actions threaten the CPEC project. Measures by militant outfits like kidnapping/murder of Chinese personnel, kidnapping/murder of Pakistani personnel, bombings of installations, acts of violence in major Pakistani cities, are a major source of danger. The recent horrifying collective murder of 43 people belonging to the Ismaili school of thought in Karachi is a means of sowing instability in the country. As Ismailis are a major portion of the population in Gilgit-Baltistan, this could raise sectarian strife impairing the CPEC project.

Balochistan remains the Achilles heel of the CPEC. Baloch ethno-nationalist separatists remain the keenest opponents of Chinese investments in the province. In 2006, three Chinese engineers lost their lives in an attack claimed by the BLA in Hub, a town west of Karachi. A week before the Chinese president’s visit, at least 20 laborers were killed in cold blood by BLF gunmen in Turbat. Separatists routinely attack power and energy transmission lines asides from other acts of terrorism inside Baluchistan.

Balochistan remains the Achilles heel of the CPEC. Baloch ethno-nationalist separatists remain the keenest opponents of Chinese investments in the province.

In order to specifically counter security threats to the CPEC, the Pakistani government plans to establish a ‘Special Security Division’ for Chinese workers. The ETIM and its main ally, the TTP, have been broken by successful COIN operations. However more could be done to improve security measures. Balochistan is the key to the success of the CPEC and the strategic goals associated with it. The government must engage the local dissidents in a dialogue process, and bring them back into the national mainstream. A combination of Diplomacy, Intelligence networks, Economic measures and Military tools can be used to counter foreign designs.

In the past, Pakistan and China have engaged in a variety of difficult projects that were thought impossible due to the constraints involved and still managed to achieve success. The Karakorum Highway stands as a testament to the fact. Utilizing firm political resolve, revolutionary insight and unyielding fortitude, both nations can surmount the challenges and transform the CPEC from paper to reality in a short span of time.