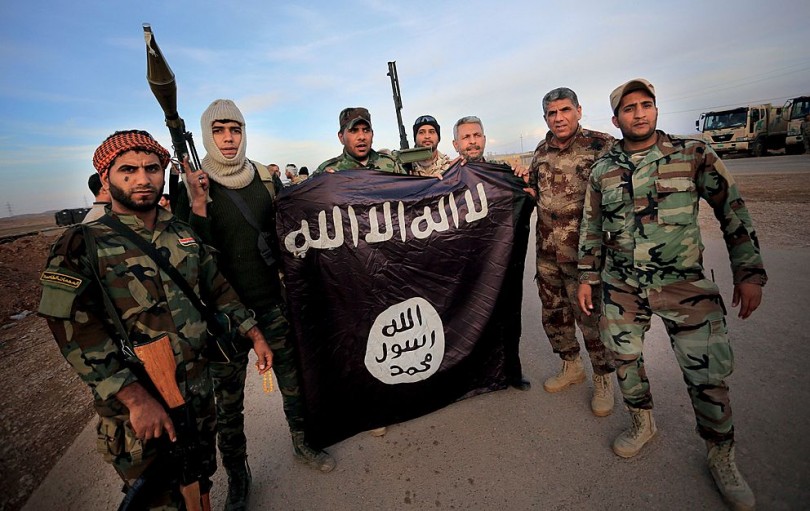 In the recent months, a rapid rise of a vile group of savages, who identify themselves as ISIS, has taken the world by the storm. Their sudden and seemingly uncontainable expansion across Iraq and Syria has been very unsettling for the civilized world. This fanatic group of ignorant religious zealots has found fertile breeding grounds in broken, lawless societies; and has affected the whole region physically, psychologically and politically. No wonder the governments of Syria and Iraq which can barely keep themselves running, often by tyranny which is stark in case of Syria, can’t stop such a movement.

What’s scarier is the aggressive and sometimes successful recruitment campaigns of this extremist Islamic group, which targets equally ignorant Muslims throughout the world to join them. Manifestation of which is seen in the form of some odd attacks in the west and large groups of organized criminals pledging allegiance to them in the east. The monkey governments of the areas infested with poisonous snakes of ISIS are ill equipped to deal with this sickness. These states lack any quality that makes a man or a society be able to achieve anything at all, let alone get rid of ISIS or likes, which themselves only thrive due to failings of those governments. We would have certainly labelled self-confidence of ISIS undue and its scare in the west exaggerated, if it wasn’t for the Paris attacks which have really shown that this problem will continue to increase exponentially if not dealt with in the proper way.

The existence of ISIS and the threat it poses to humanity is certainly real but by no means is this group, of murderers and rapists, even close to being invincible. ISIS is not a calamity but a disease. Men have come together in the past to rid much more severe infectious processes than this one. And if approached correctly by deeply comprehending the pathophysiology of this malady, this too can be solved. It should be well understood that this is a problem originating in the Muslim world and the Muslims must play a pivotal role in its rectification. We do not suggest that it will be an easy task, but we will certainly suggest a few things which in our opinion need to be considered when formulating a comprehensive plan to eliminate this cancer. If this poorly coordinated, often politically motivated monkey business sustains, this snake will continue to grow.

While ISIS is indeed a group of misguided Muslims, anyone who has real understanding of Islam would know, that the inhumane and animalistic behavior of ISIS is clearly against Islamic teachings. Media moguls with certain views, show extreme rigor in plastering terrorism to Islam, sometimes implicitly and other times explicitly. While understanding of a few about Islam is ironically very similar to the ISIS version, clearly a very vast majority of 1.6 billion Muslims would argue otherwise. The ill-informed insistence of a few popular columnists and talk show hosts that Islam as a religion, has a room for such savagery under any circumstances at all; unfortunately convinces some naive, borderline sociopath people, who identify themselves as Muslims, that this is what the true religion of Islam is, the religion they were born to follow, the religion that will take them to salvation. And hence they must do what the so called “true followers of Islam” ISIS, are doing. Now an ignorant, immature mind with underlying criminal predispositions and often a criminal record as well, who never took out time to study his own religion, has to be radicalized. This might sound stupid but you will be surprised how ill-informed people can be about their own faith.

If we clearly segregate the followers of this extremist ideology from Islam by use of popular media, this will certainly reduce the odds of lone wolf type attacks; this is especially beneficial in the U.S., where unlike Europe, these extremists otherwise might not be able to gain entry and would have to rely on radicalization of the current residents. This will also help to reduce support of these criminals in the east. These extremists are an outcome of a broken social and economic system, not of a religious ideology. They use the slogan of religion to vindicate their crimes. This should all be brought in front of the public as it is, truth is said to liberate and it surely does. The use of extensive Quran and Hadith (Sayings of Prophet Mohammed PBUH) that are totally against this kind of behavior, will enlighten the ignorant western Muslims likes of “Jihadi John” and might prevent their potential joining of these groups. This will be a great blow to ISIS method of operations, if only those at helm of affairs could understand.

Give Real Scholars of Islam Air Time on Mainstream Media

While the uncanny videos of the radical fanatics run over the media all year long, rarely do bona fide Muslim scholars are given any air time on the media to get their opinions. When finally, someone is brought on a major channel, they are often well meaning but not scholarly, and often not even practicing Muslims. And if somehow, someone who really knows religion is invited to some underdog show, they are just not eloquent enough. Such a big and successful media industry should really know whom to call on screen.

Media sometimes claims that Muslim leaders don’t condemn these atrocities enough, which in a way makes them complacent with this radical behavior. But the reality is that Islamic Scholars condemn likes of ISIS all the time, but never get enough media attention. For the U.S. the undisputed Islamic leaders like Sheikhs Yasir Qadhi, Hamza Yusuf, Omar Suleiman, Bilal Philips, and Noman Ali Khan are not invited on popular media to condemn the extremist behavior by using unequivocal evidence from Quran and Life of the Prophet itself. If such individuals are invited it will clear doubts in minds of Muslims and non-Muslims alike. This will not only prevent radicalization in many but also reduce Islamophobia which has become increasingly prevalent. If Islam is the hot topic of the day, then the real Muslim scholars must be part of these discussion panels.

As the extremist groups have their social media trolls, who appear to be solely dedicated to spreading their hateful ideology, there needs to be a cell which is dedicated entirely to counter this. While shutting down such extremist accounts have been met with limited success, more needs to be done in this matter. U.S. has already setup a mechanism to counter this by opening their own Arabic accounts; but since extremist arguments are driven by convoluted and misinterpreted Islamic sources; this can only be effectively countered by explosive spread of concrete Islamic evidence and Fatwas (Decrees) of prestigious Islamic scholars against this ideology. The scholars have tried to do all they could by themselves to raise their voice against extremist groups, but they certainly lack the resources and tactics to effectively carry out this task. Humans are impressionable and a constant surge of their minds with a certain provocative thought can have a significant impact. So this stimulus needs to be positive and based on truth rather than otherwise.

Most of us understand that an anti-terrorism drive does not merely fall in the military domain. It has significant socio-economic and political aspects which are arguably even more important. Fresh recruitments have to be prevented on local level as well; education, justice, economic opportunities and health are the main sectors that need to be efficiently dealt with. Also it is important to know, that perception of outside interference, delivers a vital blow to all pacification efforts. So these wars must primarily be fought by the locals; but certainly effective all round support by the positive world powers remains very essential.

However, with all said and done, a strong military response would always be required, to physically cleanse areas and patches being used by ISIS and likes. Muslim powers which constitute the actual neighborhood of these troubled lands, must be convinced by their western and eastern allies to contribute more. If trained military boots are needed, which will be needed, to support the local militias then those have to be soldiers from Muslim lands. The benefit of this will be multifold, including elimination of the so called “Crusaders” narrative used for the exploitation and recruitment of the ignorant by these groups.

This fight is not east vs west; this fight is human civilization vs this unique breed of men. These groups are a living and real threat to both Russian alliance and the Western alliance; and both sides should forget their differences and join hands in this battle.

For the Future to Come

Hope is, we can all come together as a world to fight this beast, and have no doubt, they will be defeated. But if we want our future generations to live in peace, and perhaps even to survive at all, measures should be taken to prevent emergence of such extremists in future. This can only be done if we are willing to be truthful for the sake of our children, our human civilization and our mother Earth. Exploiting political vacuums and socio-economic weaknesses by big powers for their own interests, constructs an extremely ugly picture for the genuine parties involved. This includes quite overt proxies and the conflicts of big powers in the power game. Using terrorist groups and techniques by certain countries to further political interests is an extremely dangerous trend that needs to be shunned collectively by all. However, where ever they emerge; we need to strengthen and help the local countries to fight their own anti-terror wars. This is absolutely important as it has political, social and above all optics related consequences.

If the world really believes in democracy and freedom then please don’t prevent political parties with rightest or leftist leanings to come to power, if the majority of people desire so. Experimentation is the right of all people, as long as they don’t interfere in other people’s belief and values, and ensure freedom for minorities to pursue their own ideals.

served as a Corps Commander in Pakistan Army and later on as Secretary Defense of Pakistan. He is among the leading defense analysts in Pakistan.

Dr. Hamza Ali Lodhi is a U.S. based physician, musician and author who
takes interest in human psychology, politics, religion and their interplay.