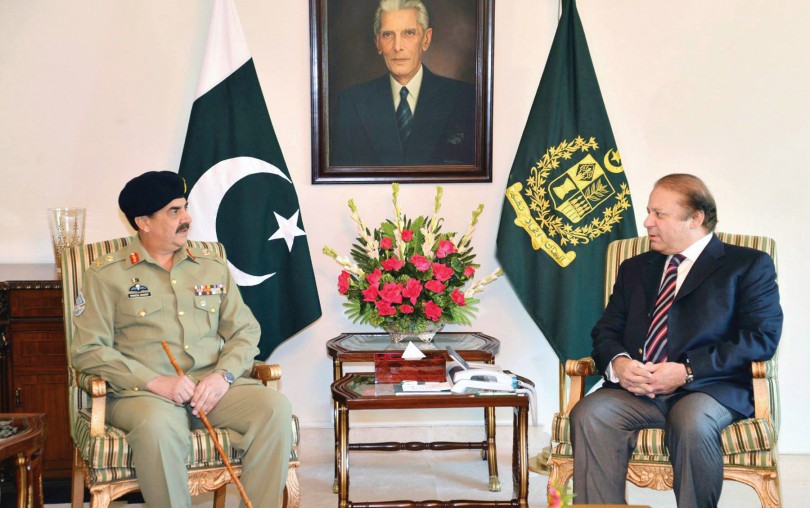 Why is that whenever Pakistan is about to make a strategic paradigm shift, there is internal and external pressure? Why is it that every time we try to follow a new set of strategic priorities, something happens in domestic politics, beyond rational comprehension? Political turmoil remains a mere visit away, particularly a visit to the North, where one state has remained our enemy for untold reasons, reasons that are now dead and buried. So just as the army chief plans to visit the Russian Federation, misstatements by a certain political party create commotion, signaling that someone somewhere did not like the guard of honor at the Kremlin. Someone somewhere did not approve of this exchange and someone somewhere definitely did not accept it comfortably. Suddenly, the said political party starts to present logics and justifications as to what the statement actually meant, and how every interpretation shall be misinterpretation. Some members disown the statement some try to shy away and some further still try to provide a context to a statement that becomes the bone of contention.

Let us not delve into the nitty gritty of the what, who and why, because it is not the scope of this debate, rather, let us focus on the main contention that surrounds this entire debate, i.e., democracy. Believing that all institutions are subordinate to democratic constitutionalism, the armed forces are also under express jurisdiction, and shall not be allowed to transgress authority beyond what is required of them. This principle implies that like all major democracies, Pakistan also has an inherent right to consider the armed forces as an executive subject for enforcement of writ of state, and nothing else. So like all progressive states, Pakistan too needs to curtail bureaucratic influence into determining priorities and preferences, and should avoid institutional bias while formulating policies both foreign and domestic. The undertone being that Pakistan somehow displays political maturity by furnishing announcements that malign one institute or more, media, as usual, adds fuel to fire by making it a matter of national integrity and security, and starts to corner political leaders through leading questions and close-ended interrogation. Freedom of speech and expression does not entail opinionated discourse, and misleading interpretations by self styled intellectuals, who are neither intellectually qualified nor academically eligible to comment on matters of a political nature often misunderstand state practice, while some only comment for the thrill of it, painting a horrid picture of the land we call home.

Freedom of speech and expression does not entail opinionated discourse, and misleading interpretations by self styled intellectuals, who are neither intellectually qualified nor academically eligible to comment on matters of a political nature often misunderstand state practice, while some only comment for the thrill of it, painting a horrid picture of the land we call home.

From a far, Pakistan seems to be a religiously bigoted state with the military telling everyone what to do, a military that is also a real estate proprietor and gulps down almost all of the annual budget. Furthermore, it is a near imploding state with all state machinery either collapsed or collapsing, and the only thing good about this country is the media. To add a little spice, every instance of terrorism in this land is portrayed to be absolutely ethnic or sect oriented, and those killed are not citizens but members of a specific community. In sum, Pakistan is then righteously ranked in line with countries like Somalia, Afghanistan and Iraq, and then the rest need not be explained. We live in a country that has more news channels than required, with experts who are expert in pointing out problems without pointing out solutions, and the only intellectual discourse we have is blatant criticism and demand of a utopia. In a country with a youth bulge, such instances can lead to frustration, which can lead to all sorts of malfeasances.

But why did we point out this three dimensional issue of civil-military relations, unharnessed media and a bad image? These issues have always been taken in isolation and never once have they been connected to one another to see where actually the problem lies. There was nothing wrong with the statement as it could have been easily ignored in light of all available domestic and international turmoil but it would not have been prudent to leave such a piquant piece alone. Before anyone could make any sense, it went as far as treason to criticize a fact, and the government, afraid of the media, passed remarks that it was never supposed to, keeping in view that there were other, far more important things on the agenda that day. Despite the fact that the institution under criticism did not even bother with what was being said, the remaining entirety of state machinery thought it best to provide their views, views that were more personal in their presentation than official.

Media is a good tool for public awareness but not at the cost of ensuing depression and aggression because then catalyst becomes often hard to control, and the resultant chain reaction is often devastating

Then comes the tricky part, every movement of the said political party is then interpreted as gestures of anxiety and fear signaling that the institution under criticism did not like it and they have definitely done something in that manner. Suddenly and quite involuntarily, it becomes a struggle between democratic existence and institutional integrity and all the experts start pouring in their opinions as to how this is in fact a turning point in Pakistani politics. Along comes the budget and like all other budgets before, the same old issue is brought to light that it is not citizen-friendly and is tailor-made to facilitate the rich. Coming from landowners and industrialists, this statement seems not only hypocritical but also blasphemous with respect to sentiments of the common man but instead of understanding financial and economic constraints of the country, the panel of experts deliberates on the fact that once again, a certain institute got more than the rest.

Civil military relations are at their optimum best at status quo and even if someone wants to interpret it as a clandestine coup, they can do so for want of freedom of expression. Military secures a percentage in fiscal budget this year because of what it is doing. The inability of civil bureaucracy to generate enough revenue by enforcement of tax regulations to achieve the said tax goal, and the inability of police structure to provide adequate domestic security, forces the right to invoke paramilitary and military forces, which in turn ensues costs which are beyond the ambit of defense budget. This being said, if the civilian administration requires the assistance of military contingents for securitizing the atmosphere, it holds true in a state whose civilian security framework was never designed to counter terrorism.

As far as the media is concerned, from displaying copies of official orders to directly interfering through social force, media is an institution that became a pillar of state through no legal declaration. Then, once it declared itself to be an integral portion of state functioning, all it did was criticize whatever it wanted to, except select issues like media ethics or broadcasting norms or basic standards of moral obligations before televising any news or even the use of language during their transmissions. From misinterpreting stories to misquoting facts, from twisting official statements to making opinionated panels, media in Pakistan did a lot worse than good in the name of interest of public. Knowledge is best, information is good but excess of information is a social vice, the reason being that in a developing state, aspirations to compare to a developed state alongside excessive unwanted information is definitely frustrating and harmful in the longer run.

Knowledge is best, information is good but excess of information is a social vice, the reason being that in a developing state, aspirations to compare to a developed state alongside excessive unwanted information is definitely frustrating and harmful in the longer run.

Pakistan stands at very sensitive crossroads; the government is presumed to be a military puppet, with instances of institutionally damaging callousness in statements, causing more than necessary interpretations that are being unnecessarily dispensed to public. This causes disgruntled sentiments, which results in unrest that is exploitable by foreign and domestic miscreants. This nexus is always dealt with separately and never jointly as it should be. Not every remark should be interpreted to lead to treason or blasphemy, and not every statement should be made breaking news because it creates pockets of loopholes that can be misused for more nefarious purposes than imaginable. If a panel of experts does feel the need to let out steam, and utilize their right to expression and speech, they should then at least propose solutions rather than commonplace criticism with no end point. These institutional rifts have entailed more vice than virtue, evidence being the current position of Pakistan as a state. Every violation or breach of covenants becomes legitimate because no one wants to sit quietly in response to the bad guy.

Be it translated as a coup or as premeditated political outcome, present regime in Pakistan has ensured proper institutional coherence, and sporadic hiccups are merely a part of every learning curve.

Be it translated as a coup or as premeditated political outcome, present regime in Pakistan has ensured proper institutional coherence, and sporadic hiccups are merely a part of every learning curve. Political parties, utilizing media as an outlet or source to rally public support, have played conventional domestic politics even if they tagline it under newness. Pakistan cannot afford a revolution, not because I said so but because its position and economic condition does not allow it to, and also that revolutions can be a good shortcut but it remains short-lived nonetheless. Any romanticism towards revolt must also be overviewed in the price every revolution had to pay. Media is a good tool for public awareness but not at the cost of ensuing depression and aggression because then catalyst becomes often hard to control, and the resultant chain reaction is often devastating.