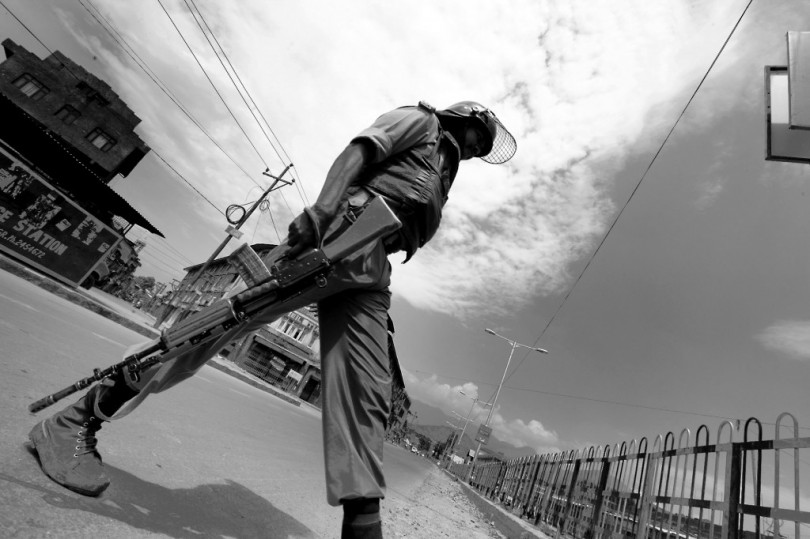 A mystically beautiful strategic valley, referred as the “princely state” in the archaic times of the British Empire; Kashmir, has since been an imperative corridor for the expansion of power in the region. The current territory of this ancient passage, hinges between the two daughters of the former British colony; India and Pakistan. Both countries have hit the battle grounds to make their claim on Kashmir, diplomacy failed to provide a reasonable solution and international organs like UN have been a silent watcher of the grave matter for a number of years.

Owing to majority Muslim population in Jammu and Kashmir, the Pakistani yearning to see it on its map is understandable. However, this does not justify and rather undermines the geo-strategic value of the Kashmiri plains. Security of a state does not only revolve around the obvious threats but rather on the survival of the state’s influence in the area. The long argued motives of Pakistan on the issue of Kashmir prove that the means of expansion of influence, the counter- measures to Indian tactics, have been a major policy nexus.

The recent unsettling events in Kashmir and the advancement of Indian forces in proximity to Pakistani boundary have raised a red flag for the military establishment. Such stand-offs between the two countries have often resulted in increased number of terror related activities and conflict made unavoidable. Though Pakistan’s policy on Kashmir has been rigid, the military set- up in the country does not hesitate to answer a bullet with a bullet and in hindering India’s desire to damage the country’s line of defense. This realistic approach to defend the boundaries of Pakistan has at times been compromised by the political individuals of the state. The meeting between the two head of states on the Russian soil, raised concerns over negligence of the Kashmir issue on the part of Nawaz Sharif. Any sudden shift of stance over Kashmir will have injurious implications on future policy formulation of Pakistan and widen the gap between the military and political establishment of the state.

The Indian aggression is not a recent occurrence; however ways of incursion have changed from contemplation to invade to deceiving proxy warfare. Owing to the operation conducted in what was considered to be a safe haven for the miscreants, Zarb-e-Azab has unearthed evidence of obvious Indian involvement in Pakistan. The proof in hand suggests and points to the level of penetration by the Indians in creating havoc across the country.  The extent of our neighbor’s support towards the enemies of the state varies from monitory funding, training and intelligence to artillery supplies.  The hues and the cries of Indian media are full of denials and counter blames.  The questions now to be addressed are, will there be another conflict over Kashmir given the hostility in the air, what will be the repercussions of such a stand-off and the stance of the Pakistani establishment.

It is a given truth that Pakistan has the most active military in the world. The boundaries need a 24/7 surveillance and internal security matters need a rapid response. Along with all the security challenges, a minor sign of aggression could escalate into a full clash with India. The “cold start” doctrine is one of the many clues of Indian military’s desperate attempts to keep ahead of the Pakistani army if ever engaged in a full scale war. As a reaction, Pakistan developed Tactical Nuclear Weapons strategy (TNWs) to thwart an impending escalation.  The political stance of Pakistan on Kashmir is in synergy to the Kashmiri resistance of Indian aggression. One aspect of the policy is stringed to the brotherly instinct and support for its freedom, and the other on the military feature to maintain a regional influence, along with a secure line of defense.

In general, the policy towards Kashmir has been steady; Pakistan seeks to resolve the aged dispute on the neutral ground of UN. The sustainability of this policy is conversely fragile.  Nuclear deterrence has kept both states at bay but the teasing movements of troops along sensitive lines freezes the normality of diplomatic ties. The surety of mutual destruction weakens the prediction of another war over Kashmir. Any belligerence from the Pakistani side will damage the image made in the UN. This leaves the military in a baffled situation as any form of retaliation can be used against Pakistan on international forums, giving India the window required to rag along the boundary. The thinkers and the doers form the core policies of any sensitive issue of a country; the idea hence of either diplomacy or a decisive war, lingers on the individuals involved in the process. Pakistan’s Kashmir related policy hence is a tug of war between the two ways of resolving conflicts.

A firm and realistic approach which serves the long term security objectives of Pakistan, whilst keeping diplomacy for face saving in the international arena, seems like a suitable policy on the Kashmir issue. International efforts to mediate on the matter have failed miserably, leaving the fate of the Kashmir people in the hands of two rivals. The military’s position on defending its border should be inked in clear words; any attempt of invasion of further advancement towards Pakistan will be dealt with equal repercussions, with no regards to any internal or external pressure. Such notions in the times where diplomacy fails to perform; aggressive response is perhaps the only option left. The Pakistani military is well equipped and manned to meet the enemy in open grounds in case of an unpredicted assault. Such life or death situations cannot be resolved with ambassadorial chats, urgency and rapidness with a preplanned and joint consensus between the civil and military establishment, send across a strong message to the enemy and the world.

The no compromise policies on certain sensitive matters of the state mostly have a strong militaristic reasoning that should be understood by the civil government of the country. The head of the state needs to understand that diplomacy is very unlikely to provide a decisive and long term solution to the issue of Kashmir. So far, the underestimation and understanding of imminent security threats from India in Kashmir are being brushed under the rug by the governmental elites , while the military continues to keep a watch on the movements of the enemy and clean the nuzzles in case of conflict. The civil government will be made to address the matter in favor of the proposed military plan if India ever oversteps the limitations. Hence till that moment, the fate of the mystic valley remains under the firm grip of uncertainness, the mounts will witness the injustice being done on the heavenly land of Kashmir.