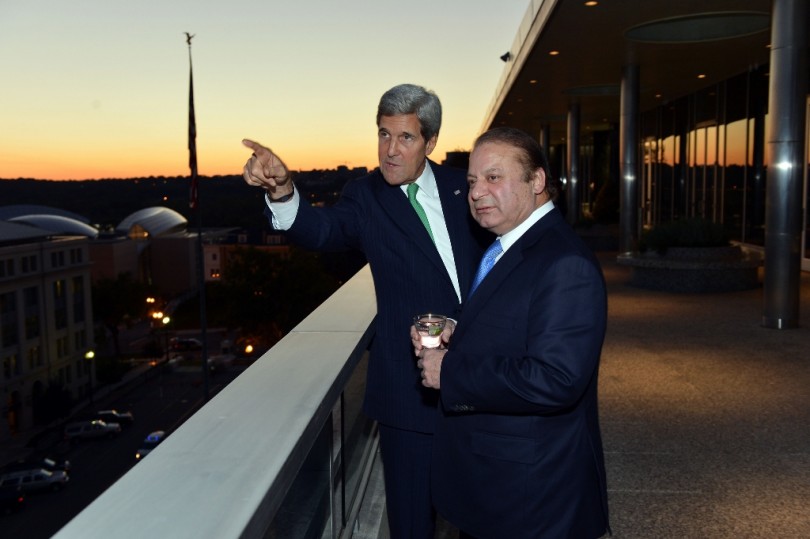 The devastating culmination of World War II had a significant bearing on the anatomy of world politics. Britain no longer remained a power that could dictate world order. The Great War was supplanted by a protracted tussle between USA and USSR. Popularly known as the Cold War, the clash between the two superpowers was different in regards strategy, operations and tactics. It was no longer about troop deployment for set-piece ground combats or strategic air bombings, but it was about increasing sphere of influences, espionages, economic doctrines or engineering coups for that matter. Regardless of the nature of war, the aim remains the same: Subduing the adversary.

Both USSR and USA groped for willing allies who could serve their interests. Convergence of strategic national interests is paramount in establishing ties. This is the only set principle in the otherwise brutal and anarchical world of international politics.

The start of the Cold War coincided with the partition of the Sub-continent, when two independent states, namely India and Pakistan adorned the map of the globe. Pakistan was located in proximity to China and USSR, and was flanked by the warm waters of the Arabian Sea. Geographical placement made the country strategically important. Winning over Pakistan was imperative for the Americans to thwart the Communist surge, especially given Nehru’s socialist leanings.

Pakistan was in dire need of an ally which could help in bolstering her defense capabilities against a bellicose eastern neighbor— India, in wake of the simmering Kashmir fiasco. The nascent state, therefore, looked towards the United States, but the response was piecemeal.

Pakistan was in dire need of an ally which could help in bolstering her defense capabilities against a bellicose eastern neighbor— India, in wake of the simmering Kashmir fiasco. The nascent state, therefore, looked towards the United States, but the response was piecemeal. However, figures likes John Foster Dulles and Paul Nietzsche broached upon the need to knit strategic ties with Pakistan. The impending, mutually-beneficial partnership thrived; Pakistan became a benign ally, and a bulwark against Communism. Defense treaties exclusively with the United States, and being a party to SEATO and CENTO, Pakistan developed a cohesive and lethal fighting force. Pakistan allowed the US to use its territory to carry out reconnaissance and surveillance missions; Badaber base being a case in point, from where U 2 planes were flown to gather intelligence.

Notwithstanding the opportunity costs of the alliance, Pakistan gained immensely. The country was in a position to fend-off its arch-rival India, which happened to be the leitmotif of hobnob.

Ties deteriorated with the changing geopolitics of the region, and America’s overall strategic focus. Pakistan was chided for using US aid to enhance its military power to counter India, and there were even voices calling for courting India. The Indian defeat in the Sino-Indo war, in 1962, propelled the US to counter the Chinese menace by strengthening the hands of India. Furthermore, the 1965 war dented the alliance badly. The US administration deemed Pakistan as the aggressor, while Pakistan was aghast at the lackluster support by a “friend” at the time when its territorial security was jeopardized.

During and after the 1965 war, relations between both countries were at the lowest ebb, but changing milieus again brought Pakistan forward as a linchpin in the new strategy, orchestrated by Richard Nixon and Henry Kissinger. The infamously famous “tilt”, albeit tactical, was there for all to see during the East Pakistan crisis and the Indo-Pak war of 1971. Pakistan became a conduit for the watershed détente between USA and China. The US, with the deployment of their 7th fleet and skilful diplomacy by Kissinger, greatly deterred India.

During and after the 1965 war, relations between both countries were at the lowest ebb, but changing milieus again brought Pakistan forward as a linchpin in the new strategy, orchestrated by Richard Nixon and Henry Kissinger.

Pakistan’s security hypothesis is centered on it being attacked by India. The unfavorable military equation, which came to the fore after the 1971 war, continues to dictate Pakistan’s strategic thought. The so-called Peace Nuclear Explosion (PNE) carried out by India in 1974 increased Pakistan’s insecurity and also the quest to go nuclear. This again created fissures between the two countries. The Carter Administration foisted embargoes on Pakistan as part of efforts to roll back the nuclear program. The Bhutto regime was fast-becoming a pariah, and Pakistan was no longer the main cog in America’s Cold War strategy.

The uneasiness in ties ended with the footprints of Communism in Afghanistan. The Soviet invasion of Pakistan’s western neighbor was deemed as a direct security threat by the Pakistani military high-command. The hostility from the eastern flank coupled with the presence of India’s strategic ally on the west, necessitated painstaking war-gaming. It was decided to support the Afghans to counter the military might of the Soviet forces. Contrary to popular belief, the Americans joined this last Cold War theatre later. The Reagan Doctrine called for rolling back Communism, and thus, Pakistan came to be at the heart of this campaign. The Afghan War which lasted a decade was typified with a well-coordinated entente, wherein the CIA and the ISI enabled the Mujahedeen to make the Afghan campaign way too costly an affair for the enfeebled Soviet forces.

In the process, Pakistan ameliorated its defense apparatus, and was on the cusp of developing a nuclear weapon. Again, Pakistan was able to garner what it wanted from being America’s first line of defense against Communism in the region. Indian attempts at brinkmanship, through planning attacks on nuclear sites and the exercise-cum build-up (Brass tacks), were foiled, as Pakistan had acquired the muscle to withstand an Indian onslaught. The US was able to defeat its nemesis on behest of a marriage of convenience with Pakistan.

The Soviet invasion of Pakistan’s western neighbor was deemed as a direct security threat by the Pakistani military high-command. The hostility from the eastern flank coupled with the presence of India’s strategic ally on the west, necessitated painstaking war-gaming.

However, the abrupt disengagement of the US from the region was a blow to Pakistan as it was left to deal with in-fighting and power scuffle in Afghanistan. Despite peace accords, the Afghan imbroglio was not mitigating. The takeover of Kabul by the Taliban was attributed to Pakistani efforts to subvert the country to gain “strategic depth”, something which is misconstrued in its entirety. The epoch was typified with sanctions over Pakistan’s forays in the nuclear realm and the insurgency in Kashmir, and Pakistan felt betrayed and isolated. Both India and Pakistan detonated the bomb in the summer of 1998. Pakistan circumvented pressure, and bore the brunt to add a deterrent in its repertoire. Sanctions meant that relations with the US were again at a nadir.

The Indian factor dictated the nature of ties between the two states. Pakistan allied with the US to externally balance itself vis-à-vis India. America brokered a cease fire in the Kargil issue where the deterrence value of the nuclear arsenal was put to test.

Fast-forward to 2001, Pakistan became a frontline ally in the Global War on Terror. Erstwhile policies of the Pakistani establishment, which were essential to attain a foothold in Afghanistan, were reversed amidst criticism from conservative sections of society. Whereas foreign aid propelled Pakistan’s economic revival, the strategic alliance in wake of the cataclysmic events of 9/11 had colossal costs for Pakistan. The spillover of Operation Enduring Freedom came in shape of terrorism which continues to impede the country’s growth.

Pakistan was able to garner what it wanted from being America’s first line of defense against Communism in the region. Indian attempts at brinkmanship, through planning attacks on nuclear sites and the exercise-cum build-up (Brass tacks), were foiled, as Pakistan had acquired the muscle to withstand an Indian onslaught.

The Pakistan Army has carried out successful CTMILOPS in the tribal areas bordering Afghanistan where NATO-ISAF forces despite an extensive military campaign has failed to deter miscreants. Over the course of the last 14 years, America blamed Pakistan for much of its follies— be it sidelining Pashtuns in the make-up of the Afghan National Army, or the ill-timed troop surge— the accusations of “double game” and demands of “do more” have been the hallmark of Pak-US ties in the last few years. Events like the Raymond Davis Case, Salalah Attack or the Abbotabad raid dealt a severe blow to strategic ties.

But such occurrences have not been the main hitch. The Indo-Pak rivalry being festered in the Afghan theatre will determine the future of Pak US ties. Indian strategic investment in Kabul is detrimental to Pakistan’s interests. Intelligence leads of brutal terrorist attacks in the country suggest that the Afghan soil is a safe haven for operational planners and two of the most wanted commanders, namely Mullah Fazlullah and Mangalbagh Afridi. The nexus of the spy agencies of India and Afghanistan will try to obviate Pakistan’s influence in Afghanistan. The likely resurgence of the Taliban will sever ties with the US as it will ascribed on Pakistan’s half-hearted counter terrorism operations to camouflage “favorites”

America brokered a cease fire in the Kargil issue where the deterrence value of the nuclear arsenal was put to test.

As mentioned earlier, India by virtue of being Pakistan’s major foreign policy preoccupation will steer Pak-US ties. The burgeoning size of the Indian economy at the advent of the 21st century compelled the United States to collaborate with Pakistan’s eastern neighbor. The most worrisome development for Pakistan was the signing of a civilian nuclear deal between the US and India. Most certainly, the dual use of nuclear technology and the ease of switching to military uses of uranium makes this civilian nuclear deal a game changer in the power balance between India and Pakistan. The decade-long New Framework of Defense Relationship (NFDR) should be a cause of concern for the Pakistani security establishment. India’s growing clout is helping it win over allies, which is allowing it to flex its muscles against weaker states in the region. Incendiary statements backed by pinpricks on the Line of Control/ Working Boundary and diplomatic offensive in the United Nations have once again strained relations between the two arch-rivals.

As tensions increase with India, Pakistan is likely to tread in muddy waters with the US, for the latter considers India as an important strategic and economic partner. Pakistan, marred by instability and terrorism is resiliently bouncing back, which has to be pressed upon the international community. The likely chaotic milieus in Afghanistan and ramping-up tussle with India do not augur well for the tenuous Pak-US ties to move forward in the right direction, in which both countries can gain from the state-level camaraderie, so to speak.