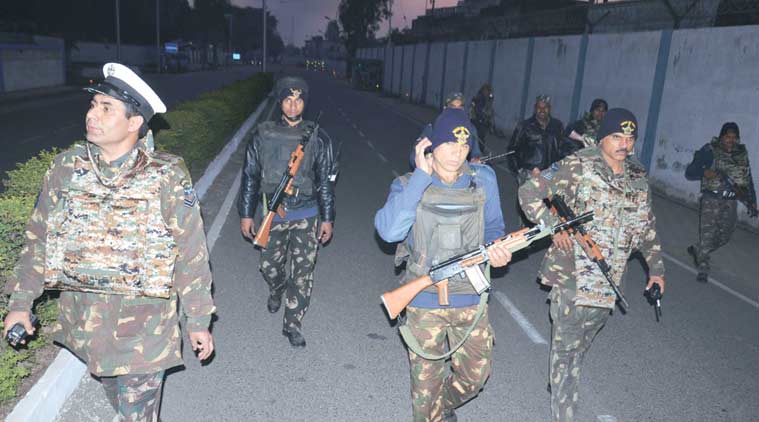 Five terrorists and seven security men were killed in an attack on Pathankot airbase in India’s Punjab state in the early hours of Saturday morning. This latest attempt is the second major attack that took place in Indian Punjab in the last six months.

The attack happened within 24 hours after armed men kidnapped Gurdaspur Superintendent of Police (SP) Salwinder Singh on Thursday night. Following the kidnapping of SP, a high alert was issued and security agencies tried to trace the gunmen but remained unsuccessful. The same gunmen, dressed in military uniform and driving the seized official car, managed to infiltrate the Pathankot airbase at around 3.30 AM in the morning. Four attackers were killed by Saturday night whereas the fifth was killed on Sunday in an operation that lasted for about 40 hours, including time duration of combing operation.

The Pathankot airbase, located about 50 kilometers from the Pakistani border, hosts MiG-21 fighter planes and Mi-25 attack helicopters, which signifies its strategic importance.

The attack is seen as an attempt to derail the peace process between Pakistan and India, which was scheduled to resume with talks between foreign secretaries of the neighboring countries in the mid of this month. The attack took place a week after Indian Prime Minister Narendra Modi’s unscheduled visit to Pakistan.

After winning the 2014 election, Modi invited Pakistani Prime Minister Nawaz Sharif to attend his swearing-in ceremony. During Sharif’s visit, it was decided to resume the peace process with talks between foreign secretaries of both countries in August 2014. But the talk was annulled by India because of a customary meeting between Pakistani envoy to India and the Hurriyat leaders ahead of the talks between the foreign secretaries.

Following Sharif-Modi meeting on the sidelines of SCO summit in UFA in July last year, it was announced that national security advisers (NSAs) of both countries will meet in New Delhi. A week later, the Gurdaspur attack took place which was also an attempt to derail the peace process. However, the scheduled NSAs meeting could not materialize because of the Indian refusal to allow the then Pakistani NSA Sartaj Aziz to meet with the Hurriyat leadership.

During his address to UN General Assembly in September last year, Sharif invited India to resume talks based on a four point agenda. The Indian response to Sharif’s proposal was to restrict the talks to terrorism only.

Later in November, prime ministers of both countries agreed once again to restart the peace process, on the sidelines of Paris Climate Conference. Consequently, NSAs of both countries met in Bangkok in the first week of December. Later, Indian foreign minister Sushma Swaraj also visited Pakistan to attend the Heart of Asia conference. During her visit, it was decided to resume the composite dialogue process. Therefore, it would be wise for both nations to continue the peace talks despite the Pathankot attack.

On the other hand, the Pathankot airbase attack has however raised serious questions about the security capabilities of Indian security agencies. They decoded the plan of attack on the Pathankot airbase on Friday morning; but they were not able to prevent and later avert the attack. Moreover, the attack took place despite of the fact that the area was under high alert following the abduction of the SP. The inability of security agencies to trace the terrorists behind the abduction for more than 24 hours raises serious questions about the capacity and professionalism of the law enforcement agencies of India.

The inability of security agencies and Punjab police was also exposed during the 2015 Gurdaspur attack. Following the attack, the Punjab police claimed that terrorists infiltrated from the Pakistani side. The claim of infiltration from the Pakistani side was refuted by the Border Security Force (BSF). Moreover, the security agencies have so far been unable to present a final report on the supposed route taken by the terrorists involved in the Gurdaspur attack.

, Indian media, in the past also blamed Pakistan for terror incidents without any substantial proofs. Like the 2001 Indian Parliament Attack and 26/11 Mumbai terror attacks. Similarly, the 2006 and 2008 Malegaon bombings and 2007 Samjhauta Express bombings were also blamed on Pakistan. But investigations of these bombings later identified Hindu extremists as the culprits.

Pakistan could never manage to play around the weak links knotted together by Indian media and its handlers and India so far has presented its case very smartly and loudly. Pakistan remains on the receiving end, because of its inability to manage this soft yet effective onslaught from the Indian side. This shows a controlled application of Non-Kinetic means and methods by Indian policy makers to build up a dark image of Pakistan and to acquire sympathetic vote for India on the diplomatic fronts of the world.

But the current attack has been accepted by the United Jihad Council, an alliance of freedom fighting groups from the disputed territory of Indian held Kashmir. This not only raises serious questions on the reporting standards of Indian media but also shows that the internal fault line of India resulted into such an attack. Dialogue to resolve Kashmir issue, should therefore be an integral part of the peace process between India and Pakistan.

Despite media rhetoric, India does not have a dearth of internal enemies. It is fighting not only an insurgency in Kashmir but also in its northeast as well as a widespread Naxalite rebellion in its center. India’s Punjab where the attack took place is already wracked by the Khalistan movement which seeks independence from New Delhi. The Malegaon and Samjhauta bombings were traced to an armed Hindutva group bent on replacing modern India with a theocratic Hindu state. The internal fault lines of India need to be explored and addressed domestically, regionally and also globally on respective forum. Peace process should not be jeopardized by the actions of a few and it should definitely not be derailed, because of the internal unrest in India.

Despite the unfortunate Pathankot attack, governments of both countries should continue the peace process. Like India, Pakistan also suffers from terrorism and insurgency, Pakistan offered India its full cooperation and rightly so. Pakistan has an extensive experience of low intensity conflicts and combat capabilities of Pakistani forces during FIBUA (Fighting in Built up Areas) has produced phenomenal results over the past few years, and it can be another point on the agenda for the Scheduled meeting of Foreign Ministers of both countries to cooperate and collaborate to share the experiences in this area of expertise. Dialogue and only dialogue will result in resolving the issues, which kept this region on the brink of destruction since the inception of India, Pakistan and the disputed territory of Kashmir.