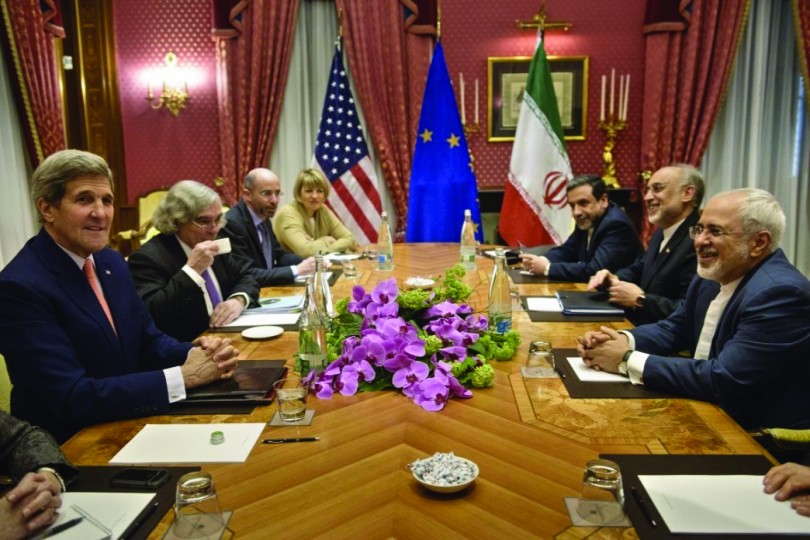 The recent terrorist strikes in Saudi Arabia and subsequent claims by the IS are just one slot in the events to come. Middle East in general has always been an ideal scale to rate and rank trickledown effect of destabilization in the world over.  The Arab Spring and subsequent events thereof made clear signals that Middle East shall continue to dominate both world trade and world diplomatic behavior. From the installation of IS to the initiation of sectarian geostrategic competition, Middle East has escalated all forms of conflict that could be imagined but all this debate stands still at a pertinent question, what options are on the table for Saudi Arabia, fatigued by concerns over the Iranian nuclear program? This is where major fissures in Middle Eastern politics and strategy are observed. Whereas the Kingdom of Saudi Arabia is a compliant nation with respect to memorandums and international covenants concerning maintenance of non-proliferation of nuclear weapons in the Middle East, the consistent concerns over Israel’s nuclear capabilities and the more recent Iranian nuclear threat have definitely tipped the balance off; the only noteworthy question is to what extent has the balance been tipped? The answer, as always, is threefold.

In one instance, the Saudi nuclearization frenzy took mainstream attention when it was rumored that the Pakistani nuclear program was financed by the Saudi government, followed by the second summit of the OIC held at Lahore. The main purpose was to introduce a viable response through maintenance of deterrence between Middle Eastern Muslim nations and Israel’s growing regional influence. The telltale rumors that Pakistan was to be a launch pad for all deterring potential towards a resurgent Israel would be potent enough to rescue the Muslim states in close proximity with the enemy, noteworthy being the fact that prior to this summit meeting, the Muslim states had already fought and lost against Israel due to lack of coherence and excessive individualism. That debate being aside, the notion that Pakistan was being ‘prepared’ as the ultimate line of defense quickly fell into an abyss of nothingness because this is not exactly how the nuclear realm goes.

The Kingdom of Saudi Arabia is a compliant nation with respect to memorandums and international covenants concerning maintenance of non-proliferation of nuclear weapons in the Middle East, the consistent concerns over Israel’s nuclear capabilities and the more recent Iranian nuclear threat have definitely tipped the balance

The second instance was that since Pakistan and Saudi Arabia have an alliance and somehow the root of all problems in Saudi perspective is Iran, due to undisclosed reasons, Pakistan being in close geographical proximity to Iran might serve as a vital lynchpin to dissuade any regional adventurism by Iran. The purpose in more technical terms would be to associate credible threat under the ‘extended deterrence principle’ to discourage Iran’s intentions in revolutionizing Middle Eastern strategic dynamics. As ridiculous as it may seem, extended deterrence is not a common game of chess where making a counteracting move is imperative to ‘win the game’, rather, it is an intricate response mechanism that not only requires initiation of extension but also formal communication of such an extension in order to cement deterrence to achieve credibility. So the fairytale that Pakistan awaits orders from Riyadh or Jeddah to initiate aggression against Iran is also a flawed assumption.

Yet another notion assumes that growing sectarian rift in Pakistan is actually Iran and Saudi Arabia fighting their proxy war on Pakistani soil in order to attain maximized potential leverage over an ‘unstable nuclear weapon state’ in order to install ‘intellectual control’ over strategic assets. So this theory suggests that Pakistan is actually a sandbox for two children fighting over who gets the toy, a seemingly genuine concern for certain ‘experts’ both foreign and domestic. Interesting to note is that where every terrorist activity conducted in Pakistan is somehow or the other related to one sect per attack, no one in the local media or panel of experts asserts that citizens of Pakistan are the targets, not affiliated sectarian segments of the society; an argument that could somehow or the other consolidate a devastated set of people.

The fairytale that Pakistan awaits orders from Riyadh or Jeddah to initiate aggression against Iran is also a flawed assumption.

So where in all this does Saudi nuclear acquisition to ‘balance power’ lie? The answer is simple, with enough economic pull and ample resource deterrence, not to mention the geographical position, Saudi Arabia could have acquired a nuclear status a million times if it so desired. As far as Iran is concerned, a panicked Israeli Prime Minister and similarly paranoid global community does not mean that Iran intends to go nuclear. With the Switzerland negotiations between Iran and the P5+1 swiftly approaching its June 30 deadline, it is detrimental both in terms of expert opinion and hearsay fun to assume that Saudi Arabia is scared stiff and intends to either make nukes or ask Pakistan to rent for hire.

Middle East has always remained unstable but this instability is attributed to its division and cultural core. The Ottoman Empire was divided on the basis of empiricist influence rather than ground realities and this caused their cultural tribal society to come across differences over territory, similar case study being the issues pertaining the division of Africa. Once oil was discovered and mass-scale supply was initiated, Middle East became a region where hard power would remain in the shadows as economic and resource leverage to states maximized their soft power grip over global political regime. The agitation in Saudi Arabia is not because of a prospectively nuclear Iran or a genuinely threatening IS, the trickledown effect of regime changes over the last five years are a major concerns for the Kingdom.

The Yemen situation was also misinterpreted into Saudi Arabia suddenly asking Pakistan for nuclear support because Iran had somehow financed Yemen as a proxy to take control over Saudi Arabia as a gun-for-hire to even the odds. This meant that Pakistan keeps Iran in check and Yemen does the same for Saudi Arabia, then once Iran goes nuclear, Saudi Arabia buys a few missiles from Pakistan and makes nuclear deterrence. So consequently, Iran keeps Yemen as an over watch for Saudi escalatory intentions and Pakistan serves as a Saudi launch pad against Tehran. This fantasy looks amazing if sugar coated well enough to sell as the headline or the prime time talk show but remains eons away from the hint of reality.

With the Switzerland negotiations between Iran and the P5+1 swiftly approaching its June 30 deadline, it is detrimental both in terms of expert opinion and hearsay fun to assume that Saudi Arabia is scared stiff and intends to either make nukes or ask Pakistan to rent for hire.

Saudi Arabia has remained compliant to IAEA and NPT and has also been the most active proponent for nuclear weapons free zone in the Middle East. If somehow, their intentions are to nuclearize, this would mean that international economic paradigm will shift to a more docile nation maintaining more robustness, something which Saudi Arabia will never allow. Oil competition within the Middle East is active enough to dissuade any nuclear intentions for fear of replacement. Furthermore, the principle of deterrence requires a more concrete dynamics of threat and mere sectarian violence between two states on a foreign land is not the ideal cause for deterrence. Sectarian segments and minorities in Pakistan are targeted as they serve as the best countervalue soft target because it keeps Pakistan in check and overall, very busy. Terrorists choose their target according to strategic advantage not personal favoritism for entertainment. A children’s school could serve as a vital target to display a derailed disoriented civil government and a rebellious yet dominating military segment. Choosing a military run school doubts credibility of operational capability of the armed forces currently engaged in internal military counterterrorist efforts. Choosing a specific segment indicates sectarian inclination of the state to the extent of clandestinely assisting genocide through religious militant organizations and all this proves that Pakistan is a religiously torn state about to insatiably push the button. If even a hint of this fairytale were to be plausible, Saudi Arabia utilizing such a proxy would be inherently counterproductive to the essence of deterrence.

As far as the extended deterrence is concerned, with the rumors being that Pakistani and Saudi officials have met in connection to the Yemen issue and are underway of discussing a nuclear umbrella for the Holy Cities of Makkah and Medina. The threat being that the two holy cities are under direct threat of sectarian oriented Houthi rebels is far from true as the Houthi struggle is a domestic upheaval within Yemen. Saudi response was predominantly preventive so as to discourage any potential spillover and it was restricted principally to the capital city where the rebels had asserted control. A nuclear option in this instance would be entirely counterproductive and such brinkmanship would be entirely destabilizing, something that deterrence never emphasizes. So extended deterrence in the form of a borrowed nuclear response would be principally against the concept. Extended deterrence maintains that states assert strategic assistance and it requires physical installation of extending nuclear response mechanism, whether defensive or offensive, and extending state retains control over such assets so installed. It requires a real-time threat made credible through continuous and homogenously undeviating set of actions, making threat credible.

With enough oil and global supply routes, creation of nuclear weapons on both sides of the Gulf is not necessary, no matter how panicked a few states may be.

So what have we learned today? We have learned that with enough oil and global supply routes, creation of nuclear weapons on both sides of the Gulf is not necessary, no matter how panicked a few states may be. We have learned that extended deterrence is not a motel room deal between the owner and the tenant and we have also learned that Middle East had enough money to go nuclear decades ago but there was no credible threat to begin such a move. If this assertion ever proved redundant, it would only be when Tel Aviv would actually let a few of its strike fighters do to Iran what they did in Iraq under Operation Babylon/Opera or more conveniently, what Iran did under Operation Scorch Sword in Osirak. If ever this were to happen, then the contents of this article shall stand revised and there would be a prospective nuclear holocaust and that might not allow a revised opinion to ever be published.