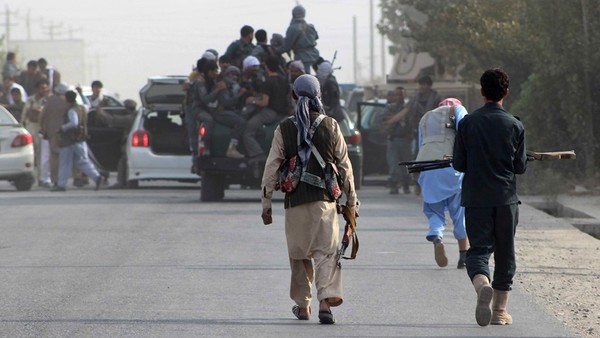 The momentous and disconcerting development in Afghanistan’s Northern Province Kunduz has taken the whole world in shock and awe when the Taliban hoisted their flag over the main square in the Kunduz city following a three-pronged attack on 28th of September 2015. Kunduz was the major town to have fallen to the Taliban after their ouster from the power in 2001 in the wake of US led coalition military intervention in Afghanistan. The seizure has made conspicuous the precarious security gaps in Afghanistan and is certainly a cataclysmic blow for the struggling Afghan government as well as a grave setback to the US and the NATO forces’ counterterrorism campaign in Afghanistan with wide-ranging consequences for the entire region.

The fall of Kunduz

The Afghan Taliban attacked Kunduz on 28th September and captured the provincial capital after several months of increased military activity in the province. The hardliners stormed the public buildings, freed inmates from the Afghan jail though met with little opposition despite the presence of 7000 government forces around the city who preferred to retreat after the Taliban offensive. President Ashraf Ghani, who just completed his one year in the office on 29th of September 2015, conceded that the attack caught the government by surprise and ordered the mobilization of Afghan security forces to regain the control over the province coupled with limited air-support from the coalition forces. Lately, the Afghan officials claimed to have taken control of key areas in the city although the conflict continues. However, the seizure of strategically important area of Kunduz, even temporarily, has increased speculations regarding Afghanistan’s future as a hotspot of insurgency amidst deteriorating security situation and its vulnerability to the impudence of the Taliban.

The Resurgence of the Taliban?

Taliban have been fighting the coalition forces ever since they have been dislodged from power in 2001. The Obama Administration in 2011 announced the withdrawal of the troops in 2014 with a residual force of nearly 10,000 having a limited role of advising and training the Afghan security forces. After the withdrawal, the situation in Afghanistan became precarious. The Taliban insurgency has been slowly mounting. They are in control of much of the Helmand province and have carried out sporadic attacks on the capital. The fractious militant movement was in news earlier this summer when it was exasperated by the leadership crisis following the announcement about the death of group’s spiritual leader Mullah Omar.  Many thought that the news would take its toll on the group’s insurgency since infighting within the ranks of Taliban commenced between the supporters and opponents of Omar’s successor, Mullah Akhtar Mansor. With differences over the leadership, many of the insurgents who opposed Mullah Akhtar defected to join groups fighting under the banner of the ISIS. The recent capitalization of Kunduz demonstrates that there may be splits within the group but the Taliban now appear to be making progress in different parts of the country. This episode would bolster the morale of Post-Omar Taliban and might help to reunite the insurgents under Mullah Akhtar Mansor who may use this confounding event as a way to demonstrate his personal credibility. However, the presence of ISIS in Afghanistan has further complicated the matters. Even though the Taliban have dazed the government, the group has to deal with rival insurgents of its own to compete for influence and recruits.

The Conundrum for the Afghan Government

The latest display of power by the Taliban following the end of the NATO’s combat mission speaks volume regarding the strength of the Afghan government and its security forces. Evidently, President Ghani’s peace overtures have not worked for Kunduz. Ashraf Ghani had declared security as the crucial concern of his government and called the opponent groups for peace talks. In-fact this year had witnessed political initiatives facilitated by Pakistan to bring the Taliban on the negotiating table which however went to the back-burner when news regarding Mullah Omar’s death surfaced. The Kunduz fiasco was in making for several months but it seemed as if President Ghani’s government was in a state of denial. His handpicked governor Mohammad Omar Shafi, an outsider from Kunduz, clearly fell down on his job as insurgents’ support in the area partly came due to malpractices and intrinsic bungles of the security and government officials.

The capture of Kunduz also indicates that the Taliban are able to strike strategic areas with alarming ease and intensity and likewise it has raised questions regarding the capability of the Afghan national security forces to fight back the insurgents. After the Kunduz debacle, Afghan security forces regrouped and mounted counter-attack supplemented by US air-support which precisely highlights the capability void that exists in ANSF after the termination of NATO combat mission. Undoubtedly the local armies trained by the US forces seem to lack in ability and motivation. The deteriorating security situation is a glaring reminder of what the local forces are up against and also highlights the perilous threat which might engulf Afghanistan if the forces are unable to effectively stop these attacks.

Dilemma for the US

The US and the NATO forces have spent much time and blood to secure Afghanistan since 2001 but perhaps all in vain. After 14 years of blood-spattered war, America has not been able to stand up a capable army let alone improve the security of the country. Bogged down in Afghanistan, the Obama administration announced the withdrawal of the troops in 2014 which now seems like an unqualified disaster for Afghanistan. As per now, there are nearly 10,000 remaining foreign forces in Afghanistan which President Obama announced to pull out completely by 2016. However, the Kunduz event has jolted America as well and is likely to complicate the course of troops’ withdrawal. Surely the foreign forces cannot lookout for the Afghan government and its security forces. Conversely, in view of the Taliban resurgence if the US insists to keep a considerable number of foreign forces in Afghanistan, it will merely depict President Ghani as an American marionette thus increasing the support base for the insurgents. The paradox for USA is indeed baffling.

The Regional fallout of Kunduz

Several political commentators have indicated that the fallout of Kunduz can likely affect the entire region. Strategically Kunduz is an important area as it acts as a transport hub for northern Afghanistan, bread-basket of the region with significant mineral resources, allows access to Central Asia and was previously Taliban’s northern stronghold. The flow of drugs, militants, money and weapons across the region already goes uncheck. The recent gain of Taliban gives a subtle indication of a wider conflict in the region in case of a Taliban advance. Afghanistan today is home to not only Afghan Taliban but Uzbeks, Tajik, Chechens and Uighur militants as well. Moreover since the initiation of Operation Zarb-e-Azb in Pakistan, many of the militants have sought refuge in Afghanistan. In addition there are elements of Al-Qaeda and ISIS. Succinctly, Afghanistan is a melting point of insurgencies. A triumph of Taliban would mean beginning of a new wave of extremism and instability in the already volatile region.

Being the immediate neighbor, the situation for Pakistan can be extensively staid. Long considered to be as the strategic assets of Pakistan, the Afghan government has time and again accused Pakistan for maintaining ties with the Taliban and the Haqqani network (a Taliban affiliated militant network) and its involvement in recent terror attacks in Afghanistan. However, Pakistan rejected the accusations and vehemently denounced the capture of Kunduz by the Taliban. Indeed an all-out Taliban presence in Afghanistan is not in Pakistan’s interests considering the fact that terrorism today poses it an existential threat. There might be no shortage of blame that fairly belongs to Pakistan since it has been supporting proxies in the past, however at the rear of recent terror spree in the country, Pakistan can ill-afford to continue with this policy. The trust deficit between the governments of the both the states and the porous border has been instrumental in jeopardizing the relations of the two states thus giving way to the miscreants to promote instability. Talibanized Afghanistan would merely exacerbate Pakistan’s internal security concerns.

Regardless of the militants’ ability to hold the city, the fall of Kunduz in the first place is a glaring blow to Afghan government’s credibility and once again echoes that Afghanistan is a tipping point. The development highlights that the Asharaf Ghani’s government and ANSF are weaker than it was thought to be. Conversely, military analysts are of the view that if President Obama proceeds with the planned reduction, it might turn out to be a strategic blunder just like Iraq. Afghanistan’s future is crucial for the regional peace. Kunduz episode is just a stark reminder of western strategy failures in Afghanistan, the incompetence of Afghan government and the looming crises which might whelm Afghanistan if the Taliban rise again.