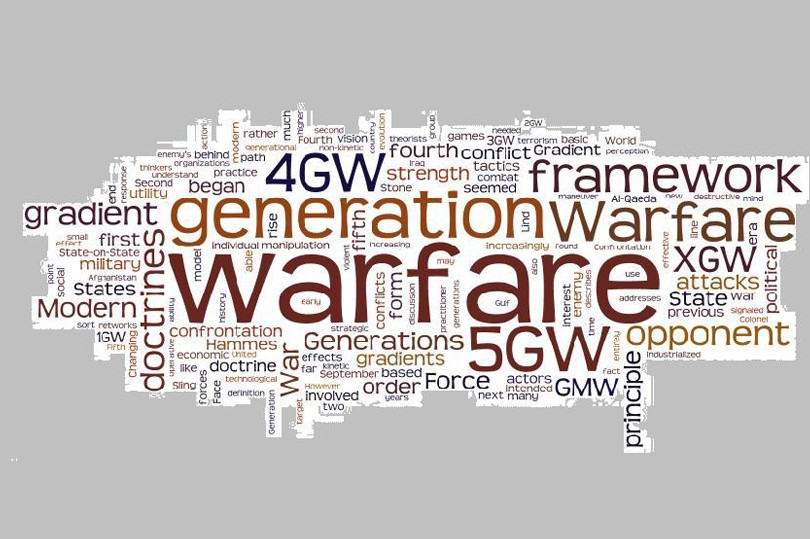 Today, the world we live in is not what our ancestors had experienced. Conflicts are still out there, but their nature and patterns have changed to a great extent. The post-Cold War world is different, and the role of international organizations, along with international treaties has changed the way international actors engage in conflicts in the contemporary era.

The major change this world has witnessed in the 21st century is the rise of non-state actors in the international arena, and the rise of geo-economics. The traditional methods, such as military means and kinetic means are being abandoned by the countries when formulating their foreign policy, because states have realized that war is not the solution. Chances of success are truncated in wars, and the ramifications, such as human causalities, reconstruction and cost factors are too high.

Military tools, capabilities and kinetic means are now only for deterrence between two or more nuclear rivals. They have been replaced by the non-kinetic means of statecraft, such as, information, technology, diplomacy and economics.

However, the military tools, capabilities and kinetic means are now only for deterrence between two or more nuclear rivals. They have been replaced by the non-kinetic means of statecraft, such as, information, technology, diplomacy and economics. Examining the cold war, the disintegration of Soviet Union came about because of the Afghan War. What was the Afghan War in its true essence? It was a proxy war – a tool of non-kinetic warfare.

According to most scholars, fourth generation warfare techniques are already being employed, and fifth generation is currently in its developing stages. The evolved form of insurgency warfare witnessed during the Vietnam and Afghanistan Wars has been labeled (4GW) fourth-generation warfare. It is conflict characterized by a blurring of the lines between war and politics, soldier and civilian.

Unfolding the 21st century, there has been a shift of power and means, from kinetic domain towards non-kinetic domain, which includes primacy of information, technology, economy and diplomacy. In various regions, trends are changing worldwide; technological advancement has been promoted, and generated by different stake holders. Due to these advancements, there is not much effort required for violent projections. All these non-kinetic warfare means justify the ends with solid gratitude and accomplishments. To quote Sun Tzu:

Defense spending notwithstanding, states opt for non-kinetic means. The concept of limited war is losing relevance, but on other side, the world is passing through “conflict transformation”, which includes the application of diplomacy, economics, and political, intelligence, information, technological and psychological tools to realize the ends. Pakistan and India have fought four major wars, and have undergone many border conflicts and military stand-offs. While most of these wars were kinetic in nature, the disintegration of East Pakistan is a pertinent example of sustained non-kinetic applications. It was a sub-conventional war with selected and controlled kinetic application by India, while pursuing the inner front volatility for main strategic effects. Not just from India, Pakistan has also been a target of non-kinetic war from other hostile actors; therefore, it is imperative to study the various means and tools employed under this domain.`

The role of media and information is a most essential tool for gripping power, and implementing policies in today’s world. Everything depends on how people perceive things. Negative and positive perception can be molded by cultivating information as shear propaganda or white propaganda, thereby achieving changes in behavior of desired targets.

Hebrew websites and magazines have been focusing on Pakistan, by organizing close to inconceivable situations regarding vulnerability of Pakistani nukes, and the possibility of their falling into Al-Qaeda hands.

India has set up a gigantic workforce of authors on the internet, and is as yet expanding its quality. Essential undertaking of this workforce would be to wage propaganda war against Pakistan, and its atomic weapons and military. Israel is pursuing an internet based disinformation and psychological war against Pakistan for a long time now. Hebrew websites and magazines have been focusing on Pakistan, by organizing close to inconceivable situations regarding vulnerability of Pakistani nukes, and the possibility of their falling into Al-Qaeda hands. Israelnationalnews.com, IsraelNN.com and Arutz-7s Hebrew news magazine are a few to name among these media outfits where Israel is spewing venom against Pakistan.

From Pakistan’s perspective, unlike any other conventional threat, cyber warfare is rather a new battle field. Pakistan is not geared up for battle against this latest threat, whereas India has all the resources to use this as a weapon against Pakistan. In the aftermath of the recent offensive operations in Myanmar, India would wage this war as a reinforcement tactic to expand their concept of blue navy.

It is a term, which was coined by Joseph Nye – an American political scientist to describe the ability to attract and co-opt rather than coerce, and often using money as a means of persuasion. The tools of soft power are values, ideologies, culture, policies and non-governmental organizations. Soft power can be converted into Smart power.

In certain aspects, cyber warfare is complex, more penetrating, and detrimental to the national security than conventional warfare.

The use of soft power from India, and its conduct of diplomacy are well fabricated and well-articulated. India has captured the world’s notice through its concepts of spiritualism, yoga, movies and television soaps, classical/popular dance and music, sports, cuisine, plural society, principles of non-violence, and democratic institutions. Ironically, Pakistan is in the shadow of Indian soft power, making it vulnerable to this power, giving a psychological edge to India.

It is only over the past decade or so that India began to play its soft power cards more systematically. India is utilizing their soft power to support larger foreign policy initiatives, such as, the Look East Policy (now Act East), the Connect Central Asia policy, and developing strategic aid and trade partnerships in Africa. Pakistan should avoid jumping on the bandwagon, and rather focus on their cultural diplomacy and soft power, so they can outmaneuver Indian outrageous aims.

Creative Chaos theory was given by former Secretary of State Condoleezza Rice. Existing chaos is either exacerbated or chaos is deliberately engineered to distort public perceptions, cultivate favorable space and environment in pursuit of envisaged policy objective. Middle-East, and in specific Iraq is considered true manifestation of creative chaos theory, which is basically a subset of non-kinetic theory.

As regards Pakistan, hostile actors have been engaged in creating chaos, and endeavoring to destabilize the social fabric and economy of Pakistan.

As regards Pakistan, hostile actors have been engaged in creating chaos, and endeavoring to destabilize the social fabric and economy of Pakistan. The most important aspect of this war in Pakistan is that, different state and non-state actors are involved in organized crimes to create chaos regarding non-lethal components having a matrix of DIME (Diplomacy, Information, Military and Economics).

Pakistan is in a transition phase; projections expect to finish the discrimination between good Taliban and bad Taliban in quest of peace and security. The new situation thus requires an expansive consensus within Pakistan’s political streams – a step critically important for the country’s rejuvenation in the aftermath of ‘war on terror’. Pakistan has encountered a massive destruction in its territory due to non-kinetic/fourth generation warfare. There is great emphasis on the quest for security and stability, but without revisiting and re-fabricating the fault lines of the country, it is unachievable. These fault lines are explained below in detail:

All of these fault trends are the prime target of hostile networks and NSAs who aim to increase vulnerabilities, and set the institutional implosion process in motion.

In 1988, Pakistan became the first Muslim and the world’s 7th nuclear power. It has a strong nuclear deterrence and capable, combat-ready armed forces, but still far behind in the art of non-kinetic warfare. The dynamics of modern warfare are changing rapidly and soon we might be witnessing Fifth-Generation Warfare (5GW) in coming years.

It is clear that non-state actors are no longer mere proxies of a state, but the prime threat. Fourth and fifth-generation warfare are post-Westphalian in the sense that they mark the end of a nation/state’s monopoly over violence.

Fifth-generation warfare has further blurred boundaries: What is a battlefield and what is not? Who is a combatant and who is not? Which is a weapon and which is not? If you take the war to the militants in North Waziristan, they will bring it to the urban centers. If you attack throat-slitting brutes, they will attack 14-year-old school children. While you ponder over the legality and reasonability of the use of airpower and heavy artillery, they will brainwash youngsters to blow themselves up amongst unsuspecting civilians.

Fifth-generation warfare has further blurred boundaries: What is a battlefield and what is not? Who is a combatant and who is not? Which is a weapon and which is not?

Pakistan shows all the signs of the onset of 5th Generation Warfare and this war can only be won if dire measures are taken, and out of the box solutions are conceived by the government involving all major institutions and stake-holders, and the first and foremost initiative that can be taken in this regard is to chalk out an effective national action plan (NAP). Media, social media, information technology, psy-ops, counter propaganda are all weapon systems, ways and means of non-kinetic warfare, and Pakistan has to excel in all this if it wishes to weather the storm of 4th and 5th generation warfare.

is currently is currently working as Assistant Director. He is an MPhil Scholar at National Defence University Islamabad. He has previously worked in NDU’s research think tank ISSRA in 2015. His area of interest is Defence Studies and Foreign Policy of United States, and he writes on regional contemporary issues. His research focuses on changing world orders.