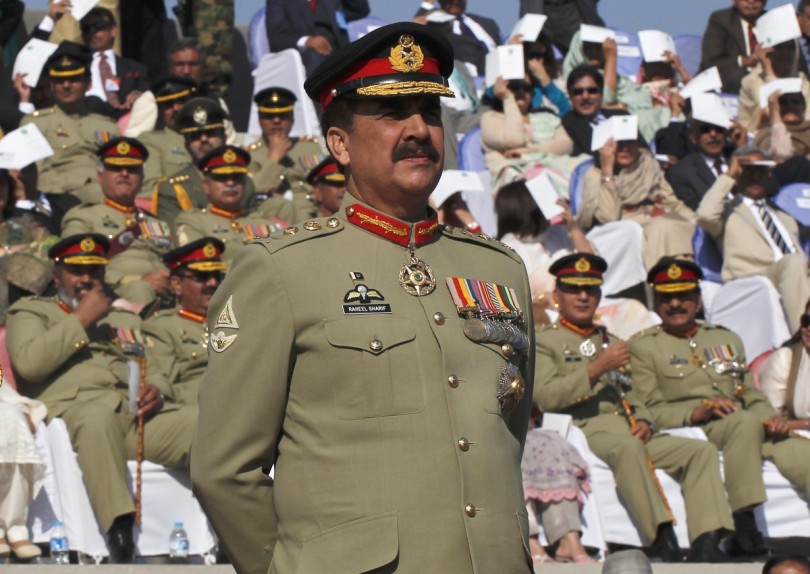 There is much hype surrounding the extension in General Raheel Sharif’s tenure these days. Whether he should seek postponement in the culmination of his tenure is a matter of intense discussion among the general public, who happen to be the direct benefactors of army’s heavy-handed initiatives against militancy and endemic corruption plaguing Pakistan. Arguments supporting General Sharif’s extension yield out of sheer desperation among the common people, who seem to have lost confidence in their elected representatives manning the parliament. Apparently, army is expected to prevail in vacuums and pores left, and in some cases, created by the politicians. What needs to be taken in account is that it’s not the entire institution of army which is being lauded for its efforts to cleanse Pakistan of its major ills, but the strong personality of the army chief. There is least scepticism regarding his leadership potential, but it is for him to ensure that his fondness among the masses doesn’t give further impetus to the sorry culture of hero worship that has obstructed institutional development in Pakistan. If General Sharif plans on to seek an extension in his tenure, it will certainly prolong the anti-corruption and anti-militancy projects that are his brainchild, but one day he will definitely have to leave. He cannot stay forever and therefore, rationality dictates that he must complete his tenure and give way to other generals who are next in line. It will further reinforce the army’s credibility as an institution and General Sharif will go down in history as a professionally remarkable army chief.

But there are some issues at hand deserving urgent attention, which if dealt badly, will most likely propel devastating consequences for Pakistan’s nascent democracy. The first is the China – Pakistan Economic Corridor, which the army is quite serious-minded about. In his recent visit to the International Institute of Strategic Studies in UK, the army chief has sternly declared that the CPEC will be made a success and any attempts to sabotage the project will be tarnished. Pakistan army believes that the CPEC will be a game-changer in the region and its success will provide propulsion to internal prosperity in this country. Given the army’s strong commitment to CPEC, it is prudent for the government to take up the project’s nitty-gritties very seriously. The army seems determined to safeguard this project from the havoc of militancy and corruption, which is essential for the government and all political parties to understand.

Along with anti-corruption and anti-militancy drives, the army has spearheaded anti-violence operation in Pakistan’s major urban centre, Karachi. Indeed, the crime scene in Karachi has been drastically altered by Pakistan Rangers, Sindh, who the local politicians have become scornful of for ‘exceeding their mandate’. It is beyond doubt that criminal elements in Karachi were breeding under the protective patronage of local political parties such as MQM, PPP and ANP, therefore an iron-fisted action against criminals had to obviously damage the parties’ political standing. In his recent visit to UK, army chief General Raheel Sharif has announced on several occasions that sleeper cells of terrorist outfits across Pakistan will be pursued and eliminated. Showing his strong commitment to eliminate terrorism from the country, the army chief hinted at expanding the anti-militancy operation to other parts of Pakistan, specifically, Punjab.

Punjab serves as the home ground to some notorious terrorist outfits like Lashkar-e-Jhangvi, Jamaat-ud-Daawa and Sipah-e-Muhammad. In comparison to other provinces, it has the strongest penetration of militant elements owing to huge numbers of impoverished people that inhabit the province. Lately, the law enforcement agencies have been chasing and successfully disrupting the network of banned Hizb-ul-Tehreer across Pakistan, having arrested some of its members from Islamabad and Karachi too. It is in this context that the probability of this anti-militancy operation expanding to areas of Punjab seems inevitable. If that happens, the government must cooperate with the army, however difficult that may be. Cooperation in the elimination of terrorism is pivotal to the success of economic development ventures like the CPEC, which the army is very serious about. It is high time for political parties to realize the damages done directly under their nose and if the army’s high command is determined to correct them, they must be allowed to do so. The army must also be assisted because the national consensus on the elimination of terrorism that we see today has never been witnessed before. It is imperative for political parties to not see the expansion of the army-led anti-militancy and anti-corruption drives in their pockets of influence as an infringement on their democratic mandates. One reason for this is the welcoming of such accountability and scrutiny within the institution of army, which General Raheel Sharif must be given due credit for. The appointment of the new Director-General Military Operations confirms this assumption. According to sources, the new DGMO was a key witness against Brigadier (retd) Ali Khan, who was convicted of having links with the banned anti-state group, Hizb-ul-Tehreer. Therefore, the expansion of anti-militancy drive in parts of Punjab must not be made an object of petty politicking and accepted in view of larger national interests.

If it is expected of General Raheel to quit exactly when his tenure ends, the government also has to ensure that its policy towards India remains commensurate to India’s policy towards Pakistan. Lately, India has rebuked peace offers made by Pakistan’s PM in the United Nations. India has also been very critical of Pakistan for allegedly brewing terrorism in the region, deliberately keeping mum on our genuine accusations of it supporting secessionist and terrorist elements within Pakistani territory. In UK, the army chief had also called for better relations with India but with dignity. Currently, in the context of a BJP-led India, where jingoistic sentiments are on a surge, it is better for the government to pause peace efforts and vehemently work towards eliminating Indian influence in Pakistan’s vulnerable places like Balochistan, Karachi and FATA. Recently, India has confirmed the presence of Baloch Liberation Army’s chief, Hyrbyair Marri, in New Delhi. The Indian Foreign Ministry spokesman has also said that his country has been home to persecuted people from all over the world, which is a clear enough signal for Pakistan to decipher India’s willingness and seriousness to strike a peace deal with Pakistan.

It is for the government and army leadership to realize our urgent domestic, regional and international needs and work towards their fulfilment in a prudent and utmost cooperative manner if the ascendancy of one institution over the other has to be avoided.

Marzia Raza student of politics, resolute to contribute to lasting change in Pakistan's social milieu through her writings.